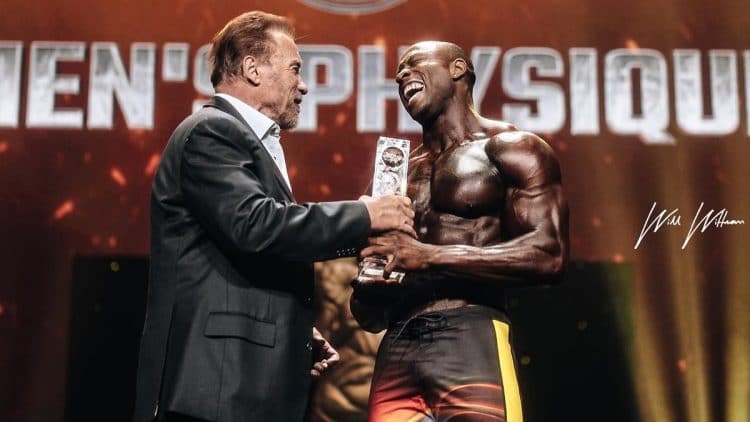 Erin Banks is your new Arnold Classic Men’s Physique champion. Banks impressed the fans and judges with his symmetrical physique and perfect conditioning to win his maiden Arnold Classic title.

2022 Arnold Classic Men’s Physique was one of the most exciting divisions as there was neither the AC defending champion nor a returning champion on the roster, leaving the throne wide open for a new champion to be crowned on Saturday, Mar. 5, 2022, in Columbus, OH.

The 2020 AC Men’s Physique champion Andre Ferguson sat this competition out. On the other hand, the 2021 Men’s Physique Olympia champ, Brandon Hendrickson also did not compete at the 2021 AC.

Notably, there was no Men’s Physique contest at the 2021 Arnold Classic USA due to COVID-19 restrictions.

Diogo Montenegro, Erin Banks, Emmanuel Hunter, and Antoine Weatherspoon were in the first and final callouts, making them the frontrunners for winning the 2022 Arnold Classic Men’s Physique title.

Erin stayed in the center for the majority of the first and final callout which made us believe he had a real shot at winning the 2022 AC Men’s Physique title.

Erin Banks has quickly become one of the best Men’s Physique athletes. Banks was runner-up to Hendrickson at the 2021 Olympia in his rookie year.

It was Banks’ debut Arnold Classic, and he came in with the intent to win the Men’s Physique crown at the second-biggest bodybuilding stage. This win also makes him more dangerous for Hendrickson’s throne at the 2022 Olympia (scheduled for Dec. 16-18 in Las Vegas, NV).

Banks had one of the best shoulder-to-waist ratios on the AC roster. He also overshadowed his competition in the back department. Banks proved the adage “bodybuilding shows are won from the back” true.

Erin Banks has the perfect genetics, skills, and temperament to become a future Men’s Physique Olympia champ. The 2022 AC Men’s Physique title win is a step in that direction.

Hunter had a shredded abdomen and looked very polished. He was in the top two in the back department and had a great V-taper thanks to his huge lower lats. He gave Banks a run for his money for the 2022 AC Men’s Physique title.

Hunter turned pro in 2021 as a Masters Classic Physique competitor. However, he switched to the Men’s Physique division shortly after winning his pro card.

Montenegro took third place behind Hendrickson and Erin Banks at the 2021 Olympia. While Banks had won the 2021 New York Pro to qualify for the 2021 Olympia, Diogo dominated the 2021 Puerto Rico Pro to enter the premiere bodybuilding show.

Montenegro has improved considerably over the year. After the pre-judging round, it looked like he could deliver an upset for Banks by winning the title.

Antoine Weatherspoon brought a great overall package to the 2022 AC. Although he came in a little soft, Weatherspoon’s physique got better as he spent more time on the stage.

Seok had great muscle symmetry and conditioning but it looked like he forgot to tan his legs in the pre-judging round. Had he nailed his tanning, he probably would have placed higher.

Notably, he fixed the error later in the day and showed up with tanned legs in the confirmation round.

Terrence had a great abdomen and arms and we will be looking forward to seeing him in the upcoming shows in 2022.

Do you agree with the 2022 Arnold Classic Men’s Physique results? Who do you think should have won the title? Let us know by tagging us on social media and in the comments below.