Brandon Hendrickson makes it two straight at the 2021 Olympia. 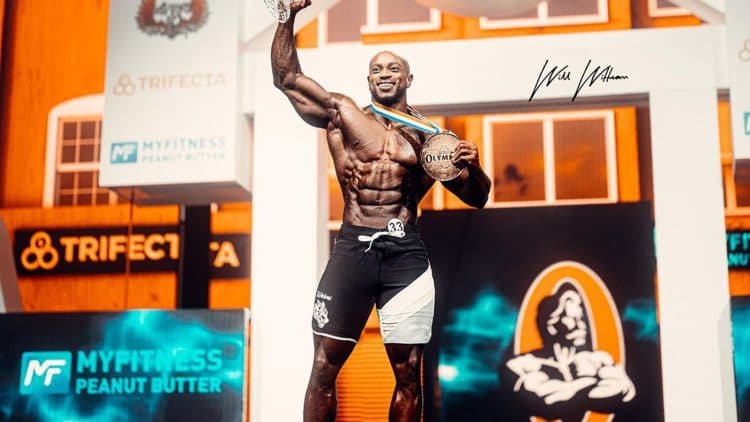 Brandon Hendrickson wins the 2021 Men’s Physique Olympia title! He took home $50k in prize money and earned bragging rights associated with Olympia champion status for the third time in his career. The event went down on Saturday, October 8, 2021, at the Orange County Convention Center in Orlando, Fl as part of Olympia weekend.

With so much hungry talent in the Men’s Physique division and two recent champs on stage this year, it was anyone’s guess as to who’d pull it off.

But the champ would repeat and make history!

While it may not get as much attention compared to Men’s Open Bodybuilding and Classic Physique, the Men’s Physique division is certainly an intriguing category with some great talent and an interesting history.

Four-time champion Jeremy Buendia is a name synonymous with the Men’s Physique division, having won the competition from 2014 to 2017. But after falling to fourth in 2018, there’s been a new few who’ve taken the spotlight.

Brandon Hendrickson claimed the Men’s Physique Olympia title in 2018 but lost it to Raymont Edmonds in 2019 before reclaiming it in 2020.

Not many competitors in history have been able to pull off being dethroned only to come back and be crowned again. That’s an impressive feat.

Now he makes it three titles and joins only a few elite competitors in history and this was a massive win for Hendrickson.

He’s now a three-time Men’s Physique champion and no doubt one of the greatest ever in his division. All of the hard work and perseverance paid off once again.

It’s also important to acknowledge all of the impressive competitors in Men’s Physique who brought it this weekend.