Brandon Curry is the 2X Arnold Classic Champion. Check out the final standings. 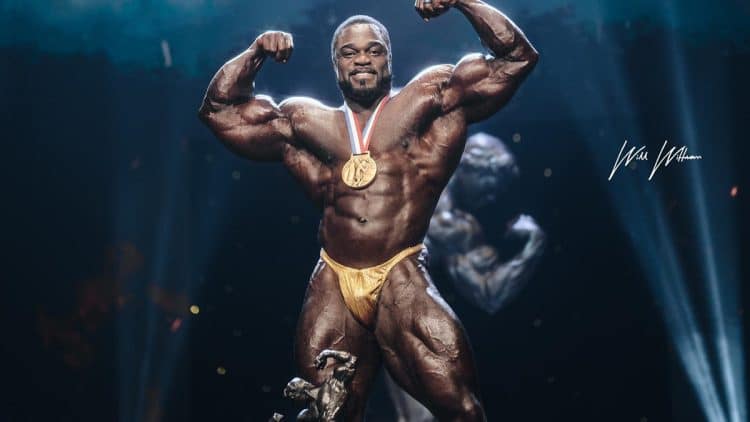 The Men’s Open bodybuilding division is Arnold Classic’s flagship contest and crowd puller. Fans get to see the best bodybuilders in the world battle it out for the top spot at the invite-only show, and the 34th edition of the AC was no different.

Before the show even began, Brandon Curry and William Bonac’s rivalry was the talk of the town. Brandon Curry had won the 2019 Arnold Classic USA and 2019 Mr. Olympia title by beating Bonac. Curry is only the third man in bodybuilding history to have won both titles in the same year.

Bonac upped his game in the next season and won the 2020 Arnold Classic. Notably, Curry did not compete at the show.

William Bonac could not defend his AC title in 2021 due to COVID travel restrictions and took a sixth-place finish at the 2021 Olympia. Bonac went full throttle at the AC stage on Mar. 5, 2022, in hopes of winning the title and earning a direct qualification for the 2022 Olympia. The 2022 Olympia is scheduled for Dec. 16-18 in Las Vegas, NV.

Bonac (along with Curry, Kuclo, and Rodriguez) were in the final callout at the 2022 AC pre-judging on Friday, Mar. 4, 2022, meaning — the judges were considering the four bodybuilders for a place on the podium.

Apart from Curry and Bonac, other strong contenders for the 2022 Arnold Classic throne included Steve Kuclo, who looked in the best shape of his life ahead of the show, Regan Grimes, who arrived at the 2022 AC with a recent pro show win, and Justin Rodriguez.

A 2022 AC title win was especially important for Steve Kuclo as he did not qualify for the 2021 Olympia. Winning a pro show earns you a direct qualification for the Olympia. Justin Rodriguez is the other bodybuilder from the pre-judging final callout who is yet to qualify for the 2022 Olympia.

Notably, the 2021 Arnold Classic USA champ Nick Walker did not compete at the 2022 AC showdown in Ohio. He is reportedly focusing on prepping for the 2022 Olympia.

Brandon Curry is currently one of the best bodybuilders in business. He has been placing in the top-two at Mr. Olympia since 2019 — three consecutive years.

Curry went back to the drawing board after his runner-up finish behind Ramy at the 2021 Olympia. He had been impressing fans with his 2022 AC progress updates photos on Instagram. Brandon Curry has been at work on his legs and showed considerable improvement in the department.

After the pre-judging round on Mar. 4, 2022, fans could tell that a top-two finish for Curry was on the cards. However, he won the show with final touches to his physique at the finals.

Winning the 2022 AC has made Curry Big Ramy’s number one challenger for his Olympia throne at the 2022 Olympia. It will also add momentum to Curry’s drive of taking down the reigning Olympia champ in Dec. 2022.

Brandon Curry probably had the best posing routine in the lineup and was rewarded for it with the Ed Corney best posing award.

From the very first callout, Bonac looked in total control. He gave Curry a run for his money and for a moment during the finals looked like could take home the gold.

Before the 2022 AC, William “The Conquerer” Bonac had vowed that he would bring his best package to the contest. We would go as far as to say that he did not disappoint.

William Bonac appeared in great shape in the pre-judging round on Mar. 4, 2022. He seemed to have regained his rhythm ahead of the 2022 Arnold Classic USA and looked like he could upset Curry for the AC title win.

Although Kuclo brought his best package to the 2022 AC stage, it wasn’t enough to beat Brandon Curry and conquer the Arnold Classic USA throne. “The Kingsnake” turned pro in 2011 and is yet to win one of the sport’s two major titles, the Arnold or the Olympia.

His best finish at the Arnold Classic was in 2021 when he took third place behind Nick Walker and Ian Valliere.

He looked better on the day of the final compared to Mar. 4. Kuclo’s conditioning improved significantly on Mar. 5 — he became a lot dryer and grainy, which definitely improved his final ranking. Kuclo retains his third-place finish from the 2021 AC.

Samson Dauda brought a balanced physique to the AC. The British bodybuilder had a height advantage over his competition and he used it to a good effect. Additionally, he was the only guy on the Men’s Open roster who performed a vacuum while posing, which made his waist look smaller and accentuated his V-taper.

He had a great posing routine where he paid homage to Flex Wheeler, Shawn Ray, and Kevin Levrone. Samson Dauda’s fourth-place finish at the 2022 AC ahead of Justin Rodriguez and Bret Wilkin came as a surprise to many fans.

Rodriguez had been one of the most active bodybuilders on social media ahead of the 2022 AC. His dry, grainy, and zany physique had many fans believe that he would be in the top three.

Justin Rodriguez had a great back, shoulders, and biceps. He probably had the best back double bicep and lat spread pose on the lineup.

Wilkin was the dark horse coming into the 2022 AC. Placing ahead of Regan Grimes puts him in a solid spot ahead of the 2022 Olympia.

Wilkin started his pro bodybuilding career as a Classic Physique competitor. He then made his pro debut in 2019 as a 212 division competitor before finally switching to the Men’s Open division in 2021.

Most Muscular and Best Poser Awards

Do you agree with the 2022 Arnold Classic results? Who do you think should have won the title? Let us know by tagging us on social media and in the comments below.