Girl power! A female fitness influencer left a group of male gym-goers speechless after pulling an insane deadlift for reps. 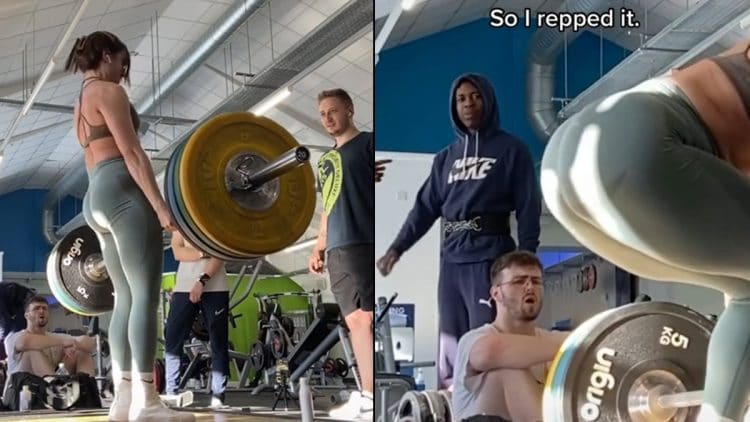 Alice Elizabeth, a female TikToker known for her workout videos, is accustomed to turning heads while she trains at the gym. In a recent video shared to social media, Elizabeth smoked a massive deadlift of 120-kilogram (264.55-Lb) for six reps, causing a group of men to drop their jaws at the impressive show of strength.

Elizabeth filmed herself while performing the crazy deadlift, which has already amassed a staggering 17 million views on TikTok. The age of social media is here to stay, and men and women alike flock to the streaming platform to show off their physical prowess. Oftentimes, these influencers make headlines for all the wrong reasons.

One of the more serious TikTok encounters came when a female fitness influencer claimed that her phone’s information was stolen at the gym. Eventually, one of the gym workers from that location contacted the TikToker via voicemail, explaining that he watched her perform glute spreads. Fortunately for Alice Elizabeth, these male gym-goers seemed more concerned with her strength than anything else.

In a recent post made on TikTok, female fitness influencer, Alice Elizabeth explained how much she loves training at the gym, especially when she can elicit such a strong reaction from a group of gym-goers.

No belt, no straps, no warm up, just the audacity #gymhumor #girlpower #lifting #strongwomen

“when someone asks me “what do you train for” I show them this reaction:” Alice Elizabeth wrote.

Reply to @roadtothethrone when someone asks me “what do you train for” I show them this reaction: #gymtok #girlpower #strongwomen

Before completing the lift, Elizabeth can be seen walking over to the bar with a couple of men smiling in her direction, presumably out of intrigue because they likely doubt that she can lift such heavy weight. One individual, in particular, couldn’t believe what he was witnessing. The text in her original TikTok video reads, “These guys didn’t believe I could lift the same as them… So I repped it.”

The video was created in just the past few days but has already accumulated over 3.5 million likes. Tens of thousands have joined the comment section to discuss the matter in greater detail.

“he [the gym-goer on the left] fell in love with her then and there” one person wrote.

“The way he raised his eyebrow when you went for the second two 😂” an onlooker chimed in.

“you’re now my idol” another wrote.

“Imagine ‘and that kids is how I met your mother'” wrote another commenter.

This isn’t the first time that a female fitness influencer dropped jaws after an astonishing deadlift. Sherein Abdelhady, a TikToker, left a group of men flabbergasted back in March after deadlifting 425-pounds. Many of the gym-goers were left speechless, and she explained that men aren’t used to seeing a female lift that much weight at a commercial gym.

With a staggering number of views/likes on these videos, clearly, people are interested in watching female fitness influencers test their physical limits inside the gym. After pulling an impressive deadlift, Alice Elizabeth is the latest influencer to receive high praise for her ability to lift heavy weight.