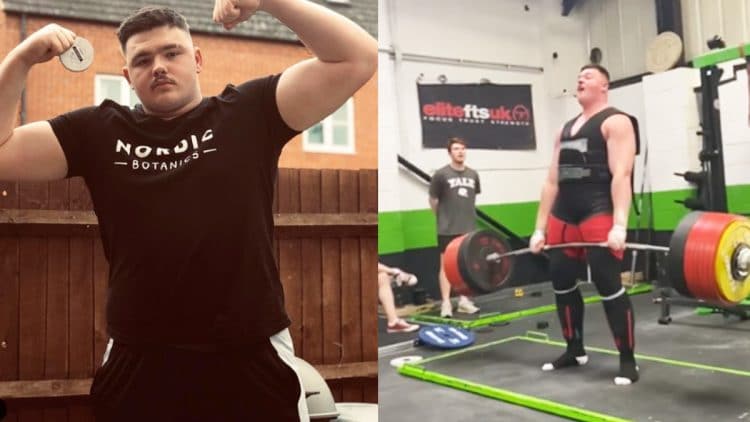 Strongman has seen a number of incredible youngsters emerge over the past few years. One of them was Lewis Byng, who posted some massive deadlifts and gradually gained recognition as a potential record holder. Well, Lewis justified the hype, as he scored a 411-kilogram (906.1-pound) U23 Deadlift World Record.

Lewis Byng performed this massive lift at the BTC Strongman Push-Pull contest, which took place on July 2, 2022, in Warwick, UK. Kevin Nee held the previous record of 410 kilograms (903.9 pounds), which he set at the Viking Power Super Series 2008. It is important to note that Kevin was almost 23 years old at that time, while Lewis is currently only 20.

Lewis Byng used a deadlift suit, lifting straps, and a lifting belt to aid him in the record-breaking lift. He got the bar off the floor relatively easily but seemed to struggle on the lockout. However, Lewis utilized the fact that hitching is allowed in Strongman, so he was leaning back to get the barbell a bit higher.

At the start of 2022, Lewis Byng shared an impressive milestone on Instagram, as he deadlifted 400 kilograms (881.8 pounds) for the first time in his career. In addition, Lewis stood at 6-foot 5-inches tall, and a bodyweight of 149 kilograms (328.5 pounds) in January. Despite his giant size, it’s not clear how much he weighs right now.

Lewis Byng At A Glance

Lewis Byng is competing at the highest level in two separate sports, which are Strongman and shot put. He has amassed great success in both sports, as he represented England and Great Britain in the shot put, while also breaking records in Strongman.

Lewis Byng’s love for athletics came at a very young age, as he started competing in long jump and 75-meter runs at the age of nine. However, with time, Lewis realized that strength is his greatest asset. He was also diagnosed with High Functioning Autism, as well as Tourette’s syndrome.

While Lewis Byng has not taken part in any major Strongman competitions, his deadlift skills are definitely world-class. For Strongman, 20-years-old is a very young age, so the majority of athletes manage to accomplish something at least in their mid-twenties.

As time passes, Lewis Byng will naturally become even stronger, and with more experience, it would be impossible to rule him out of claiming the All-Time World Record at some point. Considering Lewis is also very good at shot put, there is a possibility that we may be able to see him compete in the Olympics one day. If he qualifies for the 2024 Olympics, his resume will be mind-blowing.