In the latest chapter of TikTok drama, a female user is charged with trespassing after accusing a gym worker of being a pervert for staring at her as she stripped down to a sports bra. 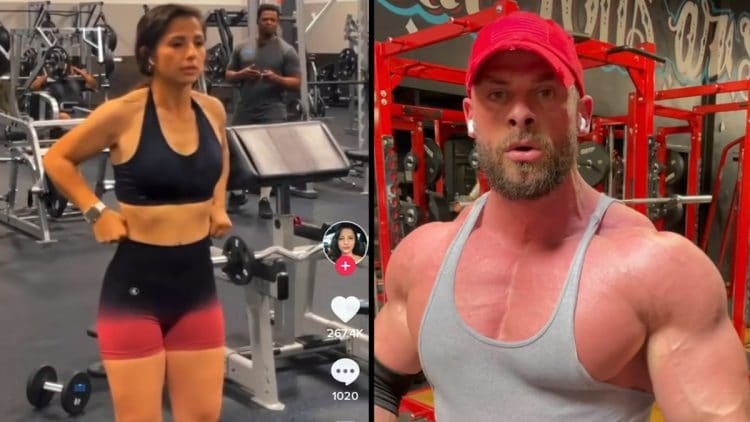 Gyms and fitness centers have become a breeding ground for hostile situations following the inception of TikTok, a streaming platform where users share videos of just about anything. In a recent video, a female TikToker becomes aggressive with a gym worker for allegedly ogling her, which prompted the associate to revoke her gym membership and have her charged by police for trespassing.

During the interaction caught on tape, the female TikToker’s video shows two gentlemen in the background several feet away at the gym. She overlays the video with “Oh daaamn”, implying that they were checking her out. The female TikToker asks the man standing in the video, ‘do you need something? Eventually, her tone changes as she repeats the question. The man eventually responds by saying ‘No. Do I need something? No’, to which the woman counters with, ‘thought so.’

Hostility between the two escalated, and the man is heard on video saying that ‘no one was looking at you in any type of way.’ After telling the man he doesn’t own the gym, he informs her that he is actually a gym staff associate. She gives the gym worker more attitude, which results in him asking her to leave or he will call the police and have her removed for trespassing. The TikTok video went viral, amassing over 250,000 likes, and even more playbacks.

While the video has been deleted from her TikTok account, it received a wide range of reactions after it exploded on social media.

Watch the full clip below:

I could of swore the dude sitting down was looking hard & dude turned to see afar he was looking at. pic.twitter.com/QgBy23Pw8r

Commenters were quick to cast judgment about the chaotic interaction.

“I could of swore the dude sitting down was looking hard & dude turned to see afar he was looking at.” one onlooker wrote.

One person thought this video was a ruse and meant to be a joke.

“Her account is privet now but I think she said she was joking in the comments” A Twitter user shared.

“Joking? As in after she made and posted the vid and got backlash?

Joey Swoll is a fitness influencer who routinely shares videos making an example out of ‘toxic gym culture‘ and bad gym etiquette. His pursuit is noble, and he is known for calling out others who take advantage of people who seemingly don’t have a voice at the gym.

While he acknowledges that people have the right to record in public spaces, Swoll’s motto of ‘mind your own business‘ often applies because he believes people are more concerned with garnering views than actually helping out each other.

Check out Joey Swoll’s response below:

“Just because somebody glances at you briefly when you’re taking your pump cover off doesn’t give you the right to post a video on social media labeling them as a pervert. This has consequences. This can have a serious effect on someone’s livelihood, their reputation, their family. It’s not something to take lightly. I had the privilege of having a conversation with this young man last night. He’s a good kid, a kind-hearted young kid and he told me more about what happened.” Joey Swoll explained.

“First off, he’s not a trainer. He wasn’t training that man. He’s an overnight gym attendant managing operations of the gym. This is about one in the morning and if somebody gets out of line or acts like this, he absolutely has the power to call the police or ask you to leave. So, he was not wrong in doing so. Also, he never said ‘oh damn’. If you watch the video closely, he briefly glanced at you when his friend looks. You put the words ‘oh damn’ which he never said, and you slow it down to make it seem like it’s longer.

Swoll added. It was a quick brief look. I look at people at the gym, I do it all the time. It doesn’t make me a pervert. I admire people, if you’re in a shared space, people are going to look at you.”

There are perverts in gyms that harass women. He is NOT one of them. #MYOB

Swoll maintains that the gym worker in question is working overnight shifts to support his two young daughters. Accusing men or women at the gym of being a pervert can result in lasting damage to one’s reputation, as Swoll suggests.

“Now, I will say this, there are men out there who harass women. There are creeps, I’ve seen it first-hand. I’ve stood up against it every time. This is not that. You decided to post a video for likes and attention to put this man’s reputation and livelihood at risk.

He’s the father of two beautiful young girls, working overnight to help support them and you tried to take that away from him. You need to do better than that and mind your own business.”

It remains unclear if this interaction was intended to be a joke. However, Swoll bought the story, and followed up, making it evident that the man being accused is a father of two, and her video puts his reputation at risk. While Swoll accepts that there are ‘creeps’ who plague fitness centers, he’s adamant that this gym worker isn’t one of those people.