A woman on TikTok shared a video of a man who wouldn't stop staring at her but it seems from another angle he was actually watching an episode of Mr. Bean. 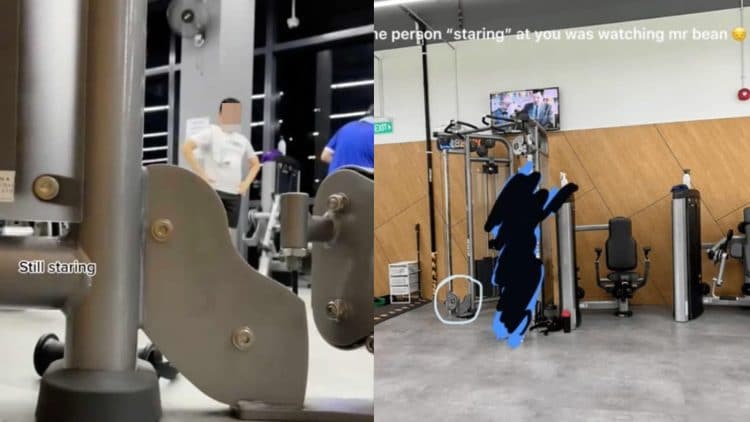 It seems like more and more odd gym occurrences are happening by the day and lately, a TikToker has been around to film it. Recently, a woman filmed a man who she thought was checking her out, but it turned out the man accused was watching an episode of Mr. Bean, the comedy television series.

It all started with TikToker, @michxlim, Michelle Lim, who uploaded a video on Jan. 19. The video, which has since been deleted and/or taken down, depicts a man being recorded in a white T-shirt, by a phone seemingly placed somewhere around some exercise equipment.

Text from the video indicates Michelle Lim had “suspicion” because the man “kept staring at my direction”. The TikToker did not say what she suspected the man of doing per se but finished off the post with a #gymcreeps. While the encounter has been taken down, here is an image of the incident that occurred.

As seen above, the woman opted to record in an effort to confirm her suspicion that indeed, the man is leering directly at her. However, after a different camera angle emerged, the narrative of the TikToker story changed suddenly.

On Jan. 20, 2022, a fellow TikToker took to the streaming platform with the handle @dontanyhowrecord and explained the real reason why the man was continuously staring in that direction. In what was allegedly filmed in the same gym, TikToker @dontanyhowrecord shared a photo that shows the man being accused of wrongdoings is actually just watching an episode of the hit comedy series, Mr. Bean.

TikToker @dontanyhowrecord writes, “The person “staring at you was watching Mr Bean.”

After the fellow TikToker, @dontanyhowrecord enlightened Michelle Lim, the woman posted a video apologizing to the gym-goer however it has since been deleted. Within the video is a written note explaining that she felt uncomfortable at the gym while doing walking lunges as she attests that she and the gym-goer made continuous eye contact. Feeling unsafe, the woman felt the need to get her cell phone out and record the man.

Michelle Lim has apologized but stated that her initial intention was to ensure that women feel safer when they go to work out at gyms. After being fully aware of the consequences of her actions, the accuser admits that she could have handled the entire situation better. In the end, the TikToker concluded the statement by apologizing to the man watching Mr. Bean and offered to apologize to him in person directly.

“Hi, my name’s Michelle and I go by my social handle: @michxlim. You probably have seen the video where I have filmed and uploaded a particular gym user who happened to be at the gym the same time as me on Tiktok. I have since deleted the video.

I remember feeling uncomfortable while doing my walking lunges as we made eye contact frequently. I felt unsafe at that point of time and when I switched to my next exercise at the cables, I decided to film him for evidence (in case anything happened to me). It was getting late, I left the gym shortly after and looked through the video while I was on the way home. Hence, approaching him or the staff didn’t come across my mind.

While I was editing the video, I just wanted to get my point across that everyone should feel safe at a public space that is commonly dominated by the males. And females should be free to choose their outfits based on their likes and preferences and shouldn’t be judged for it. That’s all.

I’m fully aware of the consequences now and I should have handled the situation better. I had no concrete evidence to show to the public that the guy was staring at me as the video was filmed discretly on ground level and at an awkward angle. Additionally, posting one’s personal privacy to the public is illegal and could have serious damage on one’s future aspects such as reputation tarnishing.

I’m sorry to the guy I’ve posted in the video – Also, I don’t have your contact. Please reach out to me so I can apologise to you personally too.”

After the her apology man in the video shared his response…

With how many recording devices are inside of gyms, it seems situations of hostility are emerging often and sometimes a simple camera angle can solve the case. With the case of Michelle Lim’s video, it seems the man accused of wrongdoings was actually just watching a TV show.