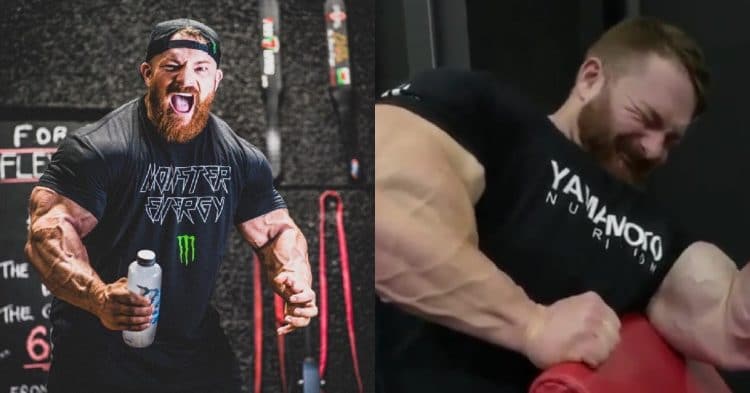 Flex Lewis is regarded as the greatest 212 bodybuilder of all time. However he showed us recently that his arms are much bigger than what a 212lb frame may suggest.

Lewis is highly regarded in the bodybuilding community for the smoking of success he has had over the years. Competing for nearly two decades, he has reached insanely high levels of success in the sport. In particular, with the 212 Divison, where he won the Olympia a ridiculous seven years in a row.

It was only when Flex stepped away from the sport in 2018, that this streak was finally broken. However fans were ecstatic to hear that he would be making a comeback, when he accepted a special invitation to the 2020 Mr. Olympia. Although they were a bit shocked to find out that he would leaving 212 behind, instead looking to compete in the Open division.

In his pursuit of competing in the Open divison, Flex Lewis had to pack on a bit more muscle. It would seem he is doing just that, as evident by an Instagram post. The video shows Flex in the gym, working on some cable preacher curls, and his arms look absolutely massive.

Lewis jokes that he is trying to get his arms big enough to intimidate his daughter’s future boyfriends. All joking aside, he is quite close to being able to do just that, as he looks gigantic. He has been working hard to get his arms to be a lot more bulky. Here he his in a post from a few weeks prior, doing some tricep pulldowns. Even though it was for an ad, it gives an idea of how hard he has been pushing himself.

It is going to be so exciting to see Flex Lewis taking the stage as an Open competitor. He is clearly putting in the work, so it will be curious to watch him, compared to the others on stage.