Learn how to do this unconventional body weight squat variation to build size and strength in your leg muscles. 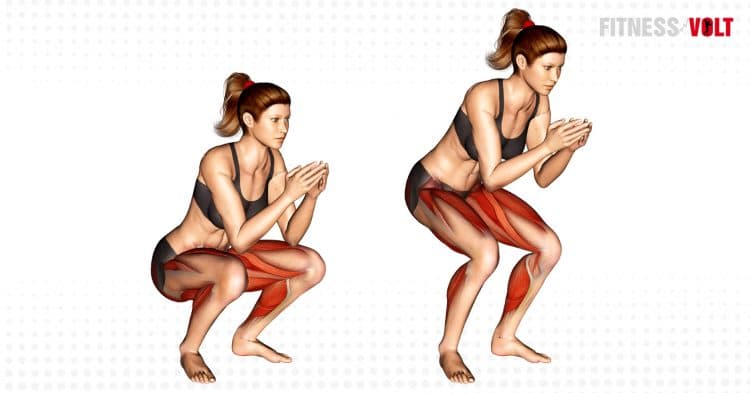 The frog squat is one of the more interesting exercise variations and it doesn’t involve leaping or jumping like a frog contrary to what you might have thought.

It requires a little more technique than the simplest of exercises but well worth the effort. Plus, once you get it down pat there’s nothing to it. This exercise can build the lower body muscles and you don’t need weights which means you have a convenient lower body exercise that you can perform anywhere.

The frog squat is great not only for improving muscularity but it can help to improve posture, reduce stiffness, and is a great option for mixing up your training.

In this guide, we’ve explained muscles worked, how to do it with tips, and variations. 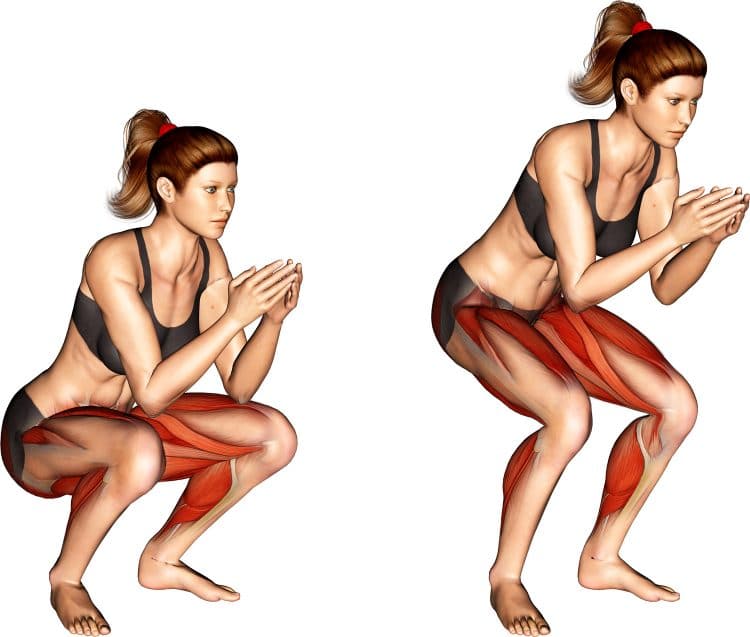 The quadriceps or quads for short is the large group of muscles that make up most of your upper leg mass. It has four heads; rectus femoris, vastus lateralis, vastus medialis, and vastus intermedialis that help to flex the hips and extend the knees like during squats.

These muscles are also important for posture, walking, and function of the spine and pelvis.

The hamstring muscles are located opposite the quads on the back of the upper leg. It has three muscles/heads; the semitendinosus, semimembranosus, and biceps femoris.

If you want to be explosive and athletic then you need strong hamstring muscles.

The glutes or butt and hip muscles are always activated during lower body exercises and activities. But the gluteus maximus, in particular, is what gives the buttocks and hips most of their shape and appearance.

Therefore, we want to really work this muscle to gets those highly sought-after buns of steel.

The function of the gluteus maximus is to extend and externally rotate the thigh.

The calves are the lower leg muscles consisting of the gastrocnemius and soleus. The gastrocnemius is the larger of the two and what most people think of when it comes to the calf muscles.

It’s the very visible muscle right below the knee that has two heads; medial and lateral and it gives the lower leg a lot of its shape. It joins with the soleus to form the Achilles tendon near the lower portion of the leg.

Then you have the soleus; a large muscle located deep to the gastrocnemius.

The calf muscles plantarflex (point the toes down) the foot and ankle. They are also important for posture, and athletic movements. Although they do have an uneven ratio of fast and slow-twitch fibers.

The core group of muscles includes the abdominals, obliques, deep core muscles, and even the spinal erectors. These muscles contribute to trunk movement and spine stability.

Squat variations are effective for building a strong and muscular core.

How To Do The Frog Squat

Here are step-by-step instructions for performing the frog squat.

The frog squat is a neat exercise that offers great benefits. But if you can’t do it or prefer using other exercises to accomplish the same thing, consider these variations/alternatives.

Related: The 12 Best Squat Variations for Hypertrophy and Strength

If for whatever reason you choose not to try out the frog squat, you can never go wrong with the basic bodyweight squat/ sumo squat to train the same muscle groups.

The starting position is similar but then rather than leaning forward, you’ll stand straight up.

If you’re more advanced and really want to try a variation that packs on the size and strength, then we recommend the machine frog squat.

While you won’t be able to lean forward and back like the bodyweight version, maintaining a forward lean position similar to the video example below can have a similar effect.

The goblet squat is a popular exercise because a weight is held at chest level while the exerciser performs squats. You’ll not only build impressive legs but you’re core and posture will greatly benefit.

Here’s a full guide to the goblet squat.

How To Incorporate The Frog Squat Into Your Training Routine

While the frog squat is worth including in your training regime, we don’t recommend making it the only leg exercise you do. You should still do conventional weighted squats (front and back squats or both), deadlifts, leg press, etc simply because these exercises build the most muscle and strength.

So do frog squats alongside the aforementioned exercises whether as a warmup or finishing exercise.

However, some days you may not have weights or feel up to doing these exercises and frog squats can be a suitable option for these instances.

To make it worthwhile, 2-4 sets of anywhere from 10-20+ reps should be sufficient to benefit from frog squats. But this is simply a recommendation and you can adjust the sets/ reps according to your experience level and goals.

The frog squat is a unique exercise that can be an effective tool in your lower body and functional training arsenal. The movement replicates normal human position and movement but it can help to improve posture and stiffness.

There are also several great variations and alternatives that can be similarly beneficial, although there are certainly advantages to the frog squat.

Many so-called fitness experts believe that squats are the only exercise you need to do to blow up your quads....

How To Do The Reverse Lunge (Leg Kick) – Tips, Variations, Alternatives, Muscles Worked

You don't need to be a martial arts enthusiast to try the reverse lunge (leg kick) but if you need...

It doesn't matter how hard your friendly neighborhood gym bro tries to convince you that he doesn't care about glute...