Graham Hicks is back to his best after a relatively long groin injury. 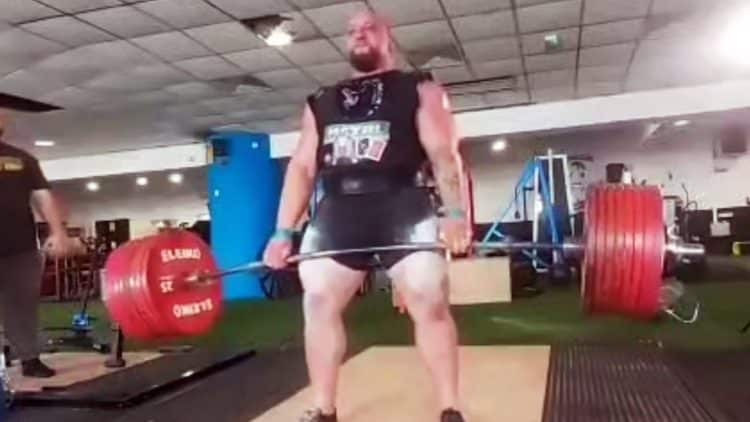 Graham Hicks has been extremely unlucky with injuries for the past few years, but he is now back to doing what he does best. Despite the fact that Graham was supposed to compete a few times this year, he has managed to control himself and appears to be fully recovered. The deadlift was always one of his greatest abilities, but having suffered a groin injury, he did not get to perform it as much. However, he made it all up recently, having posted a 440-kilogram (970-pound) deadlift double PR to his Instagram and YouTube.

This was Graham Hicks “biggest deadlift session” of his life. He started by warming up his hamstrings and doing some accessory work. Graham then jumped into the deadlift session and started with a 70-kilogram (154.3-pound) deadlift. He added weights with each set and equipped a deadlift suit, lifting belt, and lifting straps. It is interesting to note that Graham has never lifted even a single repetition of 440 kilograms (970 pounds), but now he has done two.

While his Instagram only showcased the top set, Graham Hicks shared his full thoughts and training on his YouTube channel.

“I almost can’t believe I’ve done it. Got quite emotional afterwards. Just because it’s been such a long journey, spending most of it frustrated, never being able to lift what I want to lift.”

Graham thinks that if his gym had not been so hot, he would have been able to perform another rep. In addition, he was visibly surprised with how easy his new PR came up.  Hicks then hinted that he would do a 1,000-pound (453.6-kilogram) deadlift in a competition.

“Definitely 1,000 pounds there. Looking forward to doing it in competition now.”

Graham Hicks did not mention what his next competition is, so we don’t know when he will attempt a 1,000-pound (453.6-kilogram) deadlift. However, seeing that he has not competed since October 2021, Graham will be eager to take part in some contest.

Graham Hicks has been doing Strongman for ten years, and has taken part in 25 International and National competitions. He has claimed one win in the process, which was the 2019 Britain’s Strongest Man.

Graham Hicks had to withdraw from the 2022 Britain’s Strongest Man because of his injury, but hoped to recover in time for the 2022 Europe’s Strongest Man. However, that did not happen and now it is questionable if Graham will get to compete this season. Nonetheless, it is evident that his deadlifting skills have risen to a whole new level, so maybe he can challenge for a World Record in one year’s time.