During his first workout after three weeks of rest, Larry Wheels suffers an injury. 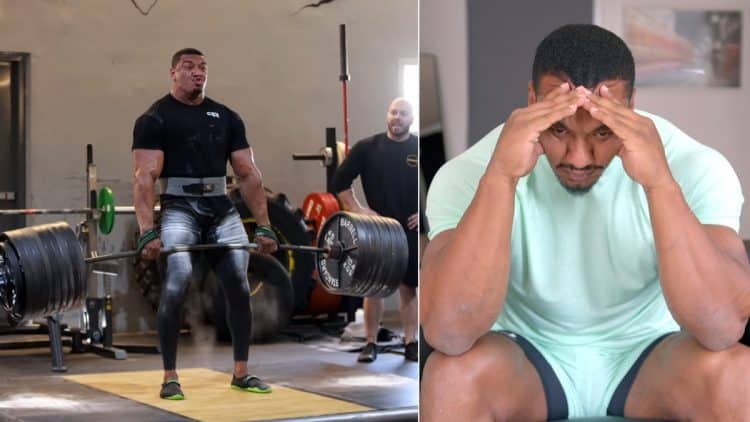 There is always a risk of injury when lifting heavy weights, and Larry Wheels knows this well. Despite having injured and torn many muscles in the past, it is reasonable to question how much more he will be able to endure. Apparently, Larry has once again hurt himself and it seems that this is the result of his own mistake. In the aftermath of taking a three-week break from training, he overestimated his strength and injured his back.

As a result of his recent hamstring injury, Larry Wheels has been unable to train for some time. He used the break to rest properly and refresh his mind, but excitement got the best of him. Larry decided to perform some deadlifts in his first training back and at one point loaded 300 kilograms (661.4 pounds). He attempted to perform multiple sets of eight repetitions, which resulted in a Grade 1 Lower Back Strain.

“After the second set I started feeling a compression in my lower back. This happened because my core was weakened from inactivity, because of no training… When you have been neglecting your core and you go to do deadlifts, your lower back is going to be doing a lot of the work.”

Prior to his injuries, Larry Wheels was preparing for the 2022 Middle East’s Strongest Man, but now he cannot compete. The competition will take place on Aug. 27-28, in Dubai, so it is impossible for Larry to get back to his best shape in such a short timeframe.

“For the immediate future, I cannot do this competition in August… I’d be foolish to think that with just three weeks of training I’d be able to perform well at the competition,”

Larry Wheels recently explained his favorite exercise is the deadlift, which he wants to accomplish by pulling 1,000 pounds (453.6 kilograms). It doesn’t matter how serious his injuries are, Larry plans to pull 1,000 pounds very soon, and he won’t back down from the challenge. Larry doesn’t want to miss out on claiming the milestone, so he makes this decision despite it not being the best.

Strongman’s learning process is very demanding, as Larry Wheels admits that he is extremely prone to injuries. So, he does not want to rush the process anymore, since it could result in a major injury.

You can watch Larry discussing his injury here:

Related: Larry Wheels On Strongman Comeback: ‘Thor And Eddie Are No Longer Competing… I Could Pull Off First-place In The WSM’

Larry Wheels was on the right track to dominate the 2022 Middle East’s Strongest Man, but he will have to wait some more for his first competitive strongman competition. As many know, Larry was very dominant in powerlifting, so strength is not a problem for him. In addition, he also took part in bodybuilding and arm wrestling events.

As Larry Wheels approaches his late twenties, he really needs to start taking care of his health. Although he has injured himself multiple times, back injuries can take a very long time to heal. Larry has discussed injuries and their prevention with Noel Deyzel at the start of this year and it was clear that he had a good understanding of how the process should be carried out. However, as he admitted in the video, Larry tried to rush his comeback in the hopes of performing well at the 2022 Middle East’s Strongest Man and that did not pay off at all.