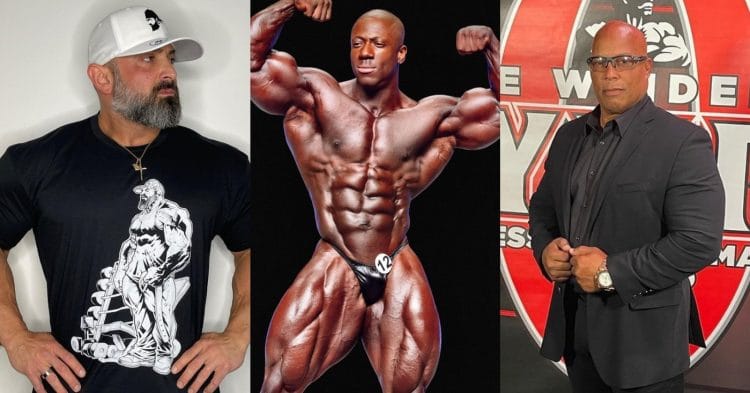 Guy Cisternino was a close friend of Shawn Rhoden, and has been tearing into people for talking about him after his death. He continued these efforts recently, while also revealing more information about the bodybuilder’s passing.

Considering how close of friends Cisternino was with Rhoden, it only makes sense that he was rather sensitive about the former Mr. Olympia’s passing. In particular, he took specific aim at a now deleted interview done with Shawn Ray, over some untrue statements made about the failed brother in iron.

Guy has not given up on this either, getting fired back up on a podcast, over an Instagram post that Ray shared. It was a post that seemed to be in response to the fiery response from Guy and others in the industry, essentially dismissing their complaints.

Following this post, Cisternino spoke on a podcast where he once again tore into Ray. Here, he reiterated the fact that he plans to have serious words for Shawn when they cross paths again, and that he has been extremely disrespectful.

“My best friend passed away, and that’s the scumbag s—t you’re going to post? Shawn Ray, I can’t wait to get in front of you, bro. I’m telling you right now, I said it in the podcast, I said it in my f—king Story, you poked the wrong f—king bear in the wrong cage, and I will f—king have the final say, you f—king piece of s—t. Just f—king wait until I see you in person. He’s a piece of s—t. That’s it, he’s a piece of garbage,” Cisternino said.

“There’s no reason why somebody passes away, who has a six year old daughter, and that fat f—king sludge of silly putty comes on a f—king interview, when him and Shawn did not like each other. You don’t have the Joker give Batman’s f—king eulogy. That was the dumbest thing I’ve ever f—king seen, and that mother—ker thinks he’s just going walk around with this f—king stupid Raiders bandana and sunglasses, think he’s going to walk around with that smile like a ferret, and he’s going to get away with it?

“Me and him are going to have f—king words, and I hope it’s in public, in front of everybody, because I’m going to embarrass that f—king little piece of s—t after what he’s done, and what he’s caused,” Cisternino added.

“He never won the Olympia, he was always butt-hurt. He ended up retiring at an early age. After he retired, he had no sponsors, he bashed everybody, nobody likes him. He’s the guy that retired, that hates the fact that he’s not in the limelight. That’s what bothers him. He’s no relevant, he’s not a pro bodybuilder on stage anymore. He still doesn’t know his place, so his place is to be a leech and do what he does.”

Aside from the clear frustration that is present in Guy Cisternino, at the end of the day he is dealing with the loss of a close friend. This is something that has to be hard to deal with, given how close he is to the situation.

In fact, he was close enough to Shawn to know some more details surrounding his death. While the autopsy is not done yet, Guy was able to share what happened in the moments leading up to, and immediately after his death.

“I knew he didn’t feel good that week. I knew he said on Friday, he felt fine. Whether that was a lie or not, I don’t know, but I know when he passed, that night, he wasn’t feeling good and he was having trouble breathing,” Cisternino said.

“He got down on his knees, and he was leaning over a bed like he does… and apparently, he asked whoever it was (that was with him) to get him a glass of water. She walked out of the room for a couple minutes, and she came back in, and I guess the girl put her hand on his shoulder and pulled him back, and was like ‘Shawn, are you alright?’ and he had already passed. When she pulled him back, he just collapsed on the floor.

This is clearly a touchy subject for Guy Cisternino, and understandably so. It will be interesting to see if Shawn Ray has any response to this.

Quinton Eriya Has The Genetics To Be A Future Mr. Olympia Threat