Hadi Choopan Gives Update On His Olympia Prep By Sharing His Killer Shoulder Workout, With Some Posing 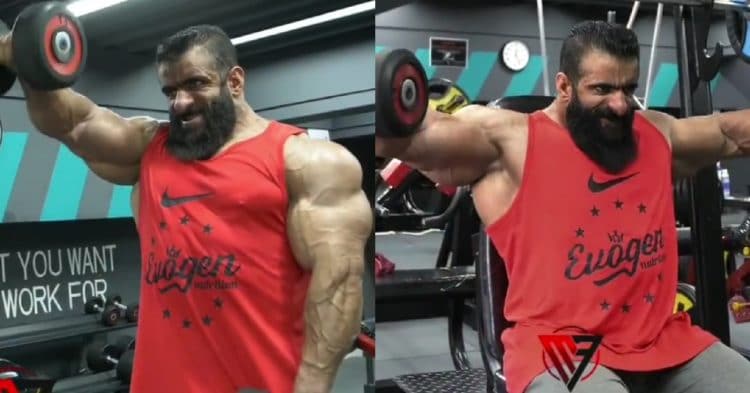 One of the people that fans are most excited to see at the 2020 Mr. Olympia is Hadi Choopan. 12 weeks out from the show, he provides a bit of a training update, and he is looking like a an absolute beast.

Iranian bodybuilder Hadi Choopan is a fan favorite, and someone that many people consider to be a legitimate threat to the Mr. Olympia throne. He made a good impression in his competitive debut in America, scoring 3rd place in the Open Division of the 2019 Olympia, and backing up the sentiments that his fans had been pushing for a while. Following this, people were excited to see his return to the stage, to the point that special circumstances were put in place to make sure he can compete this year, provided does not have issues with his visa again.

Now that the 2020 Mr. Olympia is approaching, Hadi Choopan is amping up his training and prep for the show. A few updates have been released to Instagram recently, that show the progress he has made so far. 12 weeks out from the contest, he is absolutely crushing his shoulder workouts, and looks jacked from head to toe.

The session seen there sees Hadi doing some lateral dumbbell raises, and his arms are looking jacked. His shoulders are looking round and thick, and his vascularity is off the charts. However this was not the only update we got on Choopan’s shoulder workout. nother video was posted, seeing him blazing through some more dumbbell raises, before taking a second to flex and show off his progress.

“🔥🔥🔥 What do you think about the progress of the hero Hadi Choopan towards the master of last year??”

Hadi Choopan is wearing a shirt when he flexes, so it is hard to get a really good idea about where his physique stands right now, but what we can see is absolutely impressive. One of the biggest knocks on the Iranian’s physique was that he was a little undersized compared to some of his other counterparts on stage, given the fact that he was previously a 212 competitor. However now that he is putting his entire focus into competing in the Open division, he seems to be doing some bulking before this year’s Olympia. It will be interesting to see if this will pay off in the end, as he otherwise has a physique that can rival some of the best in the world on any given day.

How To Do The Cable Side Shrug