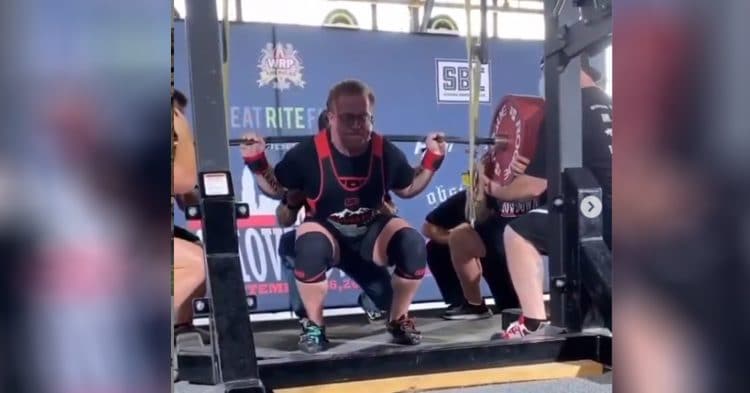 It was a personal best and a new record in the history of the world for Joe Sullivan who dunked an 822lbs squat at “The Showdown” meet for the World Raw Powerlifting Federation this past Saturday.

The personal best for Joe Sullivan was a squat of 822.3lbs and was a showdown between the previous record holder in his weight class Amit Sapir. In this meet, Sullivan crushed Sapir’s 821.2lb record by just 1.1lbs.

He posted the day’s summation on Instagram, describing it as a “Hell of a day.” His accomplishments include the 822lbs squat, a bench of 507lbs, and a 677lbs deadlift.

The other outcome? He “cried a lot” as he noted on Instagram. He’s very happy with what he’s been able to do and proud of how he’s “done everything up to it,” as he should be.

He also told his fans that he has now achieved a lifetime goal that included numbers that “no person on the planet has ever done before.” And he did that with one pound above his predecessor.

He said on Instagram that one of his accomplishments of the year include avoiding a move across the country.  Instead, he went on to create a business of a new gym, and describes a Covid-19 experience as one with a lot of new members and some great people.

Prior to this weekend’s competition, his previous squat record in the competition was 771.6lbs in December 2019 at the Great Lakes Raw by Iron Rebel competition.

But overall, he is a force to be reckoned with worldwide, a force that has only been amplified with this past week’s competition.

He’s a graduate from John Carroll University with a Bachelor’s in Exercise Science. Following his graduation, he became one of the top-ranked 198lb lifters with a 1725lb total in sleeves. He is also currently ranked #6 All-Time in the 20 Class, #15 All-Time in the 242 Class, and #3 All-Time in the squat 220 class.

What is next for Joe Sullivan? He says we’ll see what the future holds, “Always in it.”