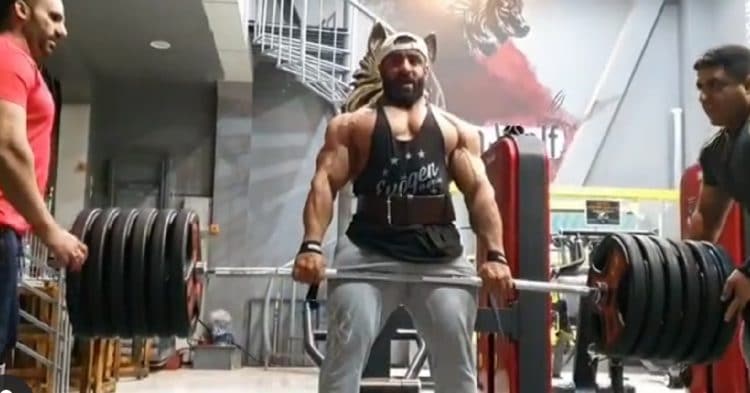 Hadi Choopan seems determined to not let this global health crisis keep him from doing some intense training. Recently he was seen doing a session that involved a gigantic deadlift set.

In the eyes of many, Choopan has the potential to be a future Olympia champion. In fact, he came very close to accomplishing this feat, at the 2019 Olympia. Despite it being his first time competing in the show, and him having to deal with issues getting a Visa, he was still considered a favorite in the contest. This proved to be true, as the former 212 bodybuilder scored third place In the Open division.

After having such a solid performance, Choopan is seemingly committing to competing in the Open moving forward. As such, he has been working hard to put on a bit more size, before his next time competing. This was evident recently, when Hadi took to Instagram to show off a gigantic deadlift dropset.

With the state of things in the world right now, it can be difficult to get a normal workout in. Nevertheless, Hadi Choopan seems to be doing as much as he can. Here he is, a few weeks earlier, doing his best to workout at home, while encouraging others to do the same.

The biggest criticism that Choopan faced when competing at the Olympia, was that he lacked the size needed to propel him to the win. Therefore his plan has been to work on that, and come with a bigger and more complete package in 2020. Obviously this has not been easy, given the difficulties the world is facing right now. However it is good to see that he is able to find some ways to keep working hard, and improving.

What did you think of this latest dropset from Hadi Choopan?