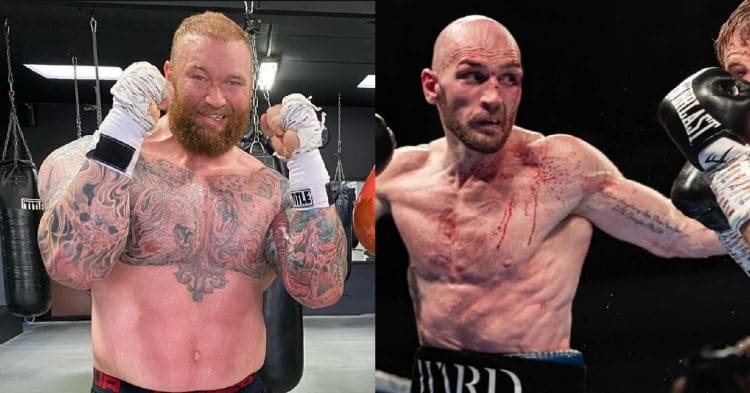 Obviously the endgame for Hafthor Bjornsson and his turn to boxing is to face off with Eddie Hall next September. However it seems that he will be making a stop along the way to get his feet wet and test himself.

When Bjornsson decided to retire from strongman earlier this year, he did so with the intent to put a focus on his health rather than competition. In order to do that, he has been able to open the door to a new career venture, one that will culminate with a boxing match with his strongman rival Eddie Hall. Since that announcement he has been grinding hard to learn the craft, showing incredible physical transformations along the way.

Hafthor Bjornsson will not be stepping in the ring with Hall until September of 2021, which is still a decent amount of time away. However he has decided to get some ring experience before this fight, by taking at least one exhibition match beforehand. Taking to his Instagram, the Icelandic champion revealed that he will be facing pro boxer Steven Ward on January 16th, in Reykjavik, Iceland.

“Super amped up to announce that I have my first exhibition match lined up for January 16th and it will be FREE to view-details on that coming soon! Stepping in the ring with a professional boxer will not only showcase what I have learned but also give me the opportunity to find out what I need to work on in the months to come. Very excited for this learning opportunity and to ‘roll with the punches’ 😉🥊”

When Bjornsson faces Ward, Steven will be 30 years old, standing at 6’2. The British boxer has a pro record of 13-1 with 4 knockouts, and competes in the cruiserweight division of 200lb. So there will obviously be a height and weight difference, but the experience will favor Steven.

At this time, there are few details available about how to watch Hafthor Bjornsson vs Steven Ward, or the parameters of the contest. That being said, it is going to be a massive moment to see how Thor looks when he jumps in the ring for the first time. He is regularly sharing updates of his training and how his technique is coming along, and he seems absolutely fierce. It is hard to argue that he is not at least utterly devoted to his move to boxing.

How do you think Hafthor Bjornsson will do when he makes his boxing debut?

Improve Your Triceps Strength With The JM press