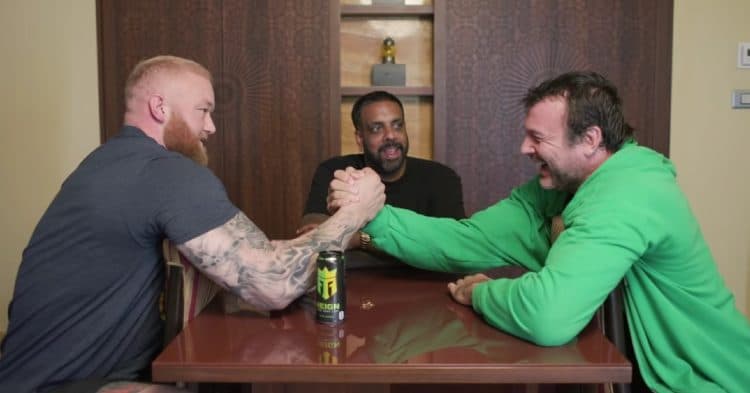 Hafthor Bjornsson makes his pro boxing debut this weekend, in a fight against arm wrestling champ Devon Larratt. Prior to throwing down in the ring, they came face-to-face and sparred verbally.

The original plan was to see Bjornsson face off against rival Eddie Hall, after more than a year of buildup. However Eddie suffered an injury which opened the door for Larratt to step up and take his place.

This is something that somewhat surprised Hafthor, as he explained during the face to face interview that both men did for IFL TV. Here he explained that he was surprised to find out that the opponent chosen for him was an arm wrestler with no boxing experience.

“I was surprised when they picked Devon because he doesn’t have a boxing background, he hasn’t been training it for a long time,” Bjornsson said.

“How much can you handle, how long can you last? I’m hoping you just go down in the first round so I don’t have to punish you. That’s the facts. That’s probably the best way to do it, if I just knock you out in the first round, so I won’t beat you up badly, because you know the more I punish you, the more pain you’re going to feel,” Hafthor Bjornsson added.

“So I should probably just quit,” Larratt responded.

“For the fans, I wouldn’t recommend that,” Bjornsson said back, with a chuckle.

From there Hafthor and Devon continue to trade barbs about their fight and what is going to happen. It is clear from Devon’s demeanor that he is super confident heading into this fight, despite the fact that he has less boxing experience than Thor.

“Thor has continued to improve and evolve, and you can see it from his first fight to his second fight, to even the footage that he’s released now. The way Thor moves, you can see the progression. But there’s a part of me that doesn’t really believe that… It looked more like sparring to me than a real fight,” Larratt said to Bjornsson.

They also spoke about the possibility of Hafthor losing to Devon, and messing up the opportunity for the big fight with Eddie Hall. He says that he is not thinking about that, because in his mind he is not going to lose.

Hafthor Bjornsson also praised Devon Larratt for stepping up on five weeks notice in a sport that he has not competed in. Devon says that if he wins, it’ll make a bigger statement because of how little time he had to prepare.

“Let’s be honest, you can’t even reach your arse. Not saying that in a mean way, but how can you reach me?” Thor quipped.

The full video is entertaining from start to finish, with Hafthor Bjornsson showing supreme confidence, and Devon Larratt trying to play mind games. This certainly helped to add to the anticipation of seeing this big fight.