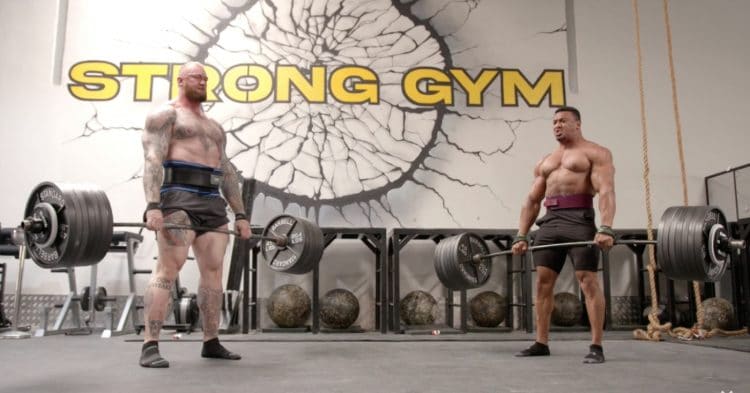 Since he transitioned from strongman to boxing training, fans have wondered how much Hafthor Bjornsson is capable of deadlifting. Larry Wheels put that very question to the test, as the two teamed up for a deadlift training session.

As it stands now, Bjornsson holds the world record for the heaviest deadlift ever, with the 501kg pull that he scored last year. Although, if Giants Live has anything to say about it, that record will be broken soon.

Lately though, Thor has changed his focus from barbells to boxing gloves, as he looks to fight fellow strongman rival Eddie Hall this September. This is something he has put his entire focus into, even announcing his retirement from strongman to do it.

However just because Hafthor Bjornsson is not actively training does not mean he has lost all ability to deadlift. He proved this recently, when he had a training session in Dubai, with fan favorite powerlifter Larry Wheels.

As the video that both men posted on YouTube shows, the two went to work on deadlifts, as Thor arrived in the country for his second exhibition match. This was the Icelandic champ’s second training session of the day, following his boxing session earlier in the day.

The men then got to work with some light weight to warm up, doing high pulls. After several increasingly heavy sets of this, they moved to the deadlift, starting at 142.9kg (315lb).

“What’s the most you’ve pulled since your record deadlift? The heaviest you’ve gone since then?” Wheels asked Thor before the lift.

“This is going to be it. Well I might have done some sessions afterwards that were a bit heavier, but in a while this is the heaviest I’ve done,” Bjornsson replied.

To close out the training session, Hafthor Bjornsson and Larry Wheels cool down with some lighter weight Romanian deadlifts. They then ended the video by discussing Thor’s boxing training and his upcoming exhibition match.

One thing is clear though, even though it has been a while since he has done heavy deadlift training, and he’s lost a ton of weight, Thor still has it. Of course, you should expect nothing less from the Mountain.