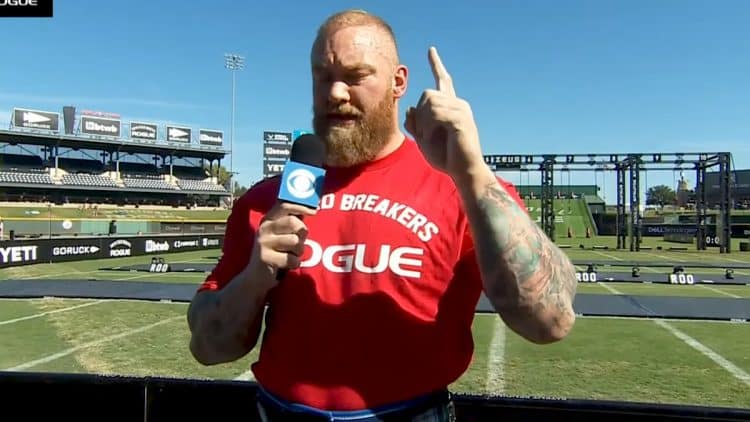 Boasting one of the most impressive Strongman and fitness resumes in history, Hafthor Bjornsson is still continuing to add to it. Despite retiring from Strongman in 2020 after setting the All-Time Deadlift World Record of 501 kilograms (1,104.5 pounds), Hafthor decided to come back to the sport for at least one more time. He appeared in the 2022 Rogue Invitational Record Breakers, which took place on October 30th, at the Dell Diamond Stadium in Austin, Texas. Hafthor came for one specific event and that was the 56-pound (25.4-kilogram) Weight Over Bar. He ended up clearing a height of 20-feet 3-inches and set a new World Record.

He also set the previous record at the 2019 Arnold Strongman Classic, and Hafthor Bjornsson was the only one who could beat it this time. In addition, seeing that Hafthor has lost a massive amount of bodyweight since 2019, this new record is significantly more impressive.

Hafthor Bjornsson has spent the last two years competing in the sport of boxing, and has achieved some success in that arena as well. He recently revealed, however, that he did not love boxing and solely trained to maintain discipline. As for Hafthor, he still has a passion for strength sports, which prompted him to return. According to his post-record statement, a full comeback is not ruled out for Strongman.

“It’s really tempting to come back, especially to compete in a show like this. You never know. I haven’t made my decision today, but I can tell you this, I might come back.”

Although Hafthor Bjornsson’s return to Strongman is still uncertain, he has recently hinted that he will return to powerlifting in a competition on December 3rd. With this World Record, he has now reignited his love for Strongman and it is possible that he will decide to compete in a full show. Hafthor would undoubtedly immediately become one of the favorites for every major title, despite not competing or training specifically for Strongman in the last two years.

Having been active in Strongman since 2010, Hafthor Björnsson has competed for a full decade. He managed to take part in 73 International and National competitions during this time span. In addition, Hafthor won 38 of these competitions, some of which include the 2018 WSM, 3x Arnold Strongman Classic, numerous Europe’s Strongest Man contests, and more.

Apart from Hafthor Bjornsson, Mitchell Hooper set a Dinnie Stone Hold World Record, while Kevin Faires set a new Thor’s Hammer World Record. So, it is evident that the 2022 Rogue Invitational was one of the most successful Strongman competitions of the year, with Hafthor Bjornsson’s comeback being a cherry on top.