Hafthor Björnsson reveals that he will be competing again, but it will surprisingly be in powerlifting. 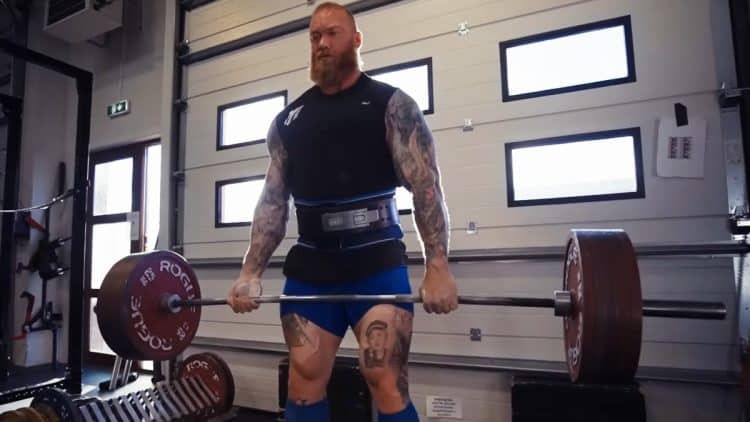 Hafthor Björnsson recently announced that he is retiring from boxing after almost three years in the sport. His journey was one for the history book, as he beat another former WSM, Eddie Hall, a bout watched by millions around the world. Although Hafthor retired from boxing, his retirement just meant that he would be able to explore new opportunities. Obviously, one of his options was to return to strength sports, and that is exactly what he is doing. Although Hafthor does not intend to return to strongman, he is currently preparing for a powerlifting competition.

Hafthor Björnsson is making a partial comeback to Strongman in order to attempt to further improve his own Weight Over Bar World Record. This attempt will take place as a part of the 2022 Rogue Invitational, which is scheduled for October 28-30, 2022. Hafthor will need to throw a 25-kilogram (55.1-pound) implement over a bar higher than 20-foot and 2-inches. As of now, he will have just over a month to prepare for the powerlifting meet.

Hafthor Björnsson has to do a lot of adjustments in order to properly transfer back to strength sports. Even he admitted that the difference in training for boxing and any strength sport is huge. According to Hafthor, he was allowed one minute of rest during boxing training, whereas strength training allows the maximum amount of rest time.

“In boxing there is no f***ing rest… Strongman and strength sports are completely different… The stronger you get, the more rest you need. My coach wants me to rest eight minutes betweens sets and I even find it hard to do so.”

Hafthor Björnsson utilized the breaks in between sets to address some stuff and make for an entertaining video overall. His first set of deadlifts was loaded with 70 kilograms (154.3 pounds) and he slowly added more weight and ended his session with a 320-kilogram (705.5-pound) pull. Having said that, it’s evident that Hafthor can do more, but as he explained, he doesn’t want to risk an injury immediately after returning. Luckily, Hafthor has not had too many problems with injuries throughout his career.

Hafthor Björnsson then moved on to address his upcoming powerlifting appearance. Hafthor did not reveal what the competition is, but it seems that he and his team will be organizing it. He intends to perform the lifts raw and total of 1,000 kilograms (2,204.6 pounds).

At one point after his boxing match with Eddie Hall, Hafthor Björnsson revealed that he felt very unmotivated to do anything. Since returning to strength sports after retiring from boxing, he has become more energetic. A few days remain until Hafthor’s attempt at the World Record, and he appears very confident.

How To Do The Smith Bench Press – Benefits, Variations, Workout Tips, Optimal Sets and Reps