Despite being long retired, Hafthor Björnsson can still easily train with 300 kilograms (661.3 pounds). 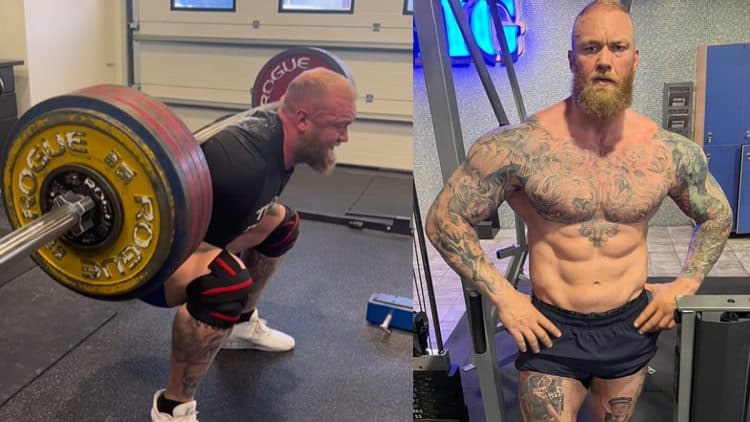 Hafthor Björnsson remains one of the most influential personalities in the strength community, despite no longer doing Strongman professionally. While Hafthor’s past and impressive resume play a role in his still being relevant, it’s his new achievements that continue to captivate audiences. The most recent one being the 300-kilogram (661.3-pound) two-rep squat.

The majority of Hafthor Björnsson’s PRs came during the period when he was the Strongest Man On Earth. However, anyone would still consider the 300-kilogram (661.3-pound) squat an impressive feat of strength. In addition, Hafthor completed two reps with the aforementioned weight.

Hafthor Björnsson used a lifting belt and knee sleeves to complete the two reps, but judging by how easy he made the weight look, these equipment pieces were only there to prevent an injury. The depth on both of Hafthor’s reps was immaculate as well.

Hafthor Björnsson did not specify what his bodyweight was at the time of the recent squat session. However, he has slimmed down drastically since his peak Strongman days when he exceeded 200 kilograms (440 pounds). This body transformation also saw Hafthor share regular updates and go viral multiple times. He was recently spotted at a posing seminar, so maybe he could venture out to bodybuilding in the near future as well.

Seeing that Hafthor Björnsson has already succeeded in Strongman and Boxing, he definitely has what it takes to accomplish incredible stuff in other sports as well. However, Hafthor achieved the most as a Strongman athlete, having won almost every major competition available. His most notable achievements are as follows:

Breaking Eddie Hall‘s Deadlift World Record was the last thing Hafthor Björnsson did as a Strongman. This resulted in a feud between the two men and they decided to squash the beef with an official boxing match. Hafthor won through a unanimous decision, so there are now rumors of his next fight. The potential opponents are Tyson Fury and Martyn Ford.

Hafthor Björnsson is still retaining a large part of his strength despite not training like he did as a Strongman or having the same bodyweight. In addition, he became a lot more mobile and thus more functional. This is seemingly his perfect shape, which still makes him one of the strongest people alive, but does not put his health at risk.