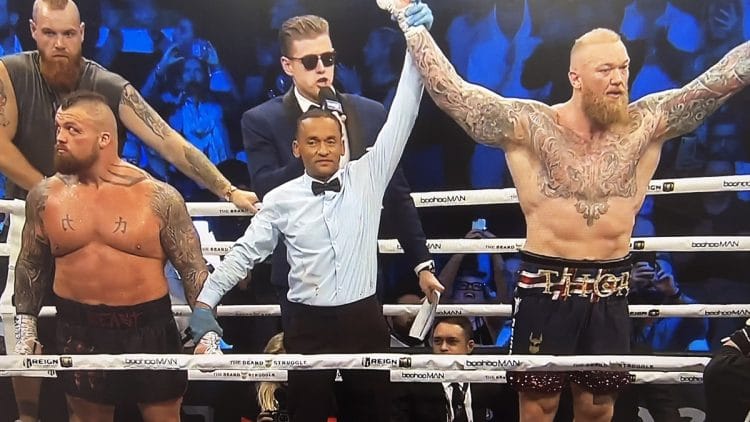 Hafthor Björnsson wins the ‘The heaviest boxing match in history’ via unanimous decision (57-54, 57-54, 57-54). The event took place Saturday, March 19th, from inside the Dubai Duty-Free Tennis Stadium. The main event was presented by Core Sports World and Segi TV, and they live-streamed it free of charge. Björnsson put an end to their bitter rivalry with Eddie Hall after putting on an amazing performance.

The Hafthor Björnsson vs Eddie Hall boxing match consisted of six three-minute rounds. Both men solidified their defense and had enough stamina to go the distance. Both Hafthor Björnsson and Eddie Hall used red-colored gloves. Hafthor wore dark blue shorts, while Hall’s was completely black They ended the boxing match in a very respectful way, as Björnsson went to Hall’s corner and hugged him.

Coming into this match, Hafthor Björnsson weighed in at 152 kg (335 lbs), while Eddie Hall’s bodyweight was 142.2 kg (313.5 lbs). The majority of their bodyweight is muscle mass, which resulted in both men displaying some extremely explosive punching power. This could also be accredited to their previous strength and Strongman training.

The first round started furiously, as Hall put in a few strong punches. However, Björnsson managed to put in some great combinations, and it could be anyone’s round.

The second round immediately got even more heated as Björnsson fell down two times, due to tripping and getting pushed. Following the second round, Eddie Hall suffered two cuts, and started bleeding.

Thor cracks Eddie with a nice left hook at the end of Round 3, and the bell comes in clutch. 😳 #ThorVsEddie pic.twitter.com/zq9nB8y6MM

The third round completely revealed their fight plans, as Björnsson was relying on combinations, and Hall wanted to find one fight-ending punch. However, Björnsson’s plan turned out to be better, as he knocked down Hall with an extremely powerful left hook. 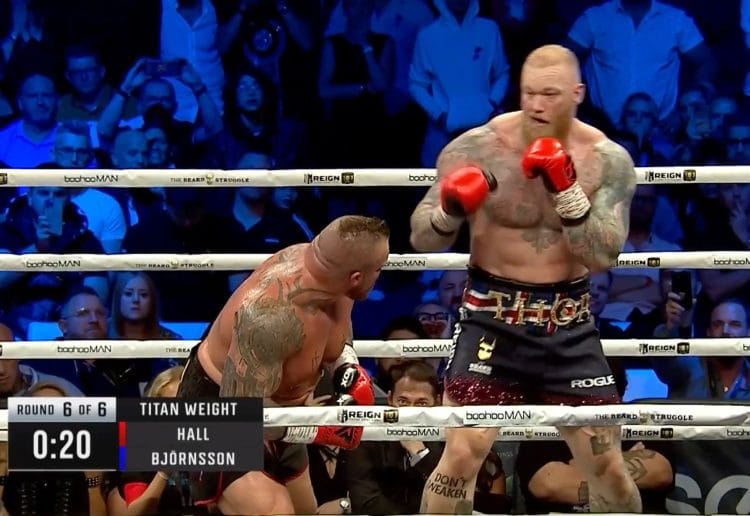 The fourth round was pretty even between the two guys, but Björnsson did land one heavy hit with his left hand.

He carried that over in the fifth round and made some good combinations, while Hall started throwing haymakers. Björnsson held Eddie in a comfortable distance, and dealt damage with jabs. 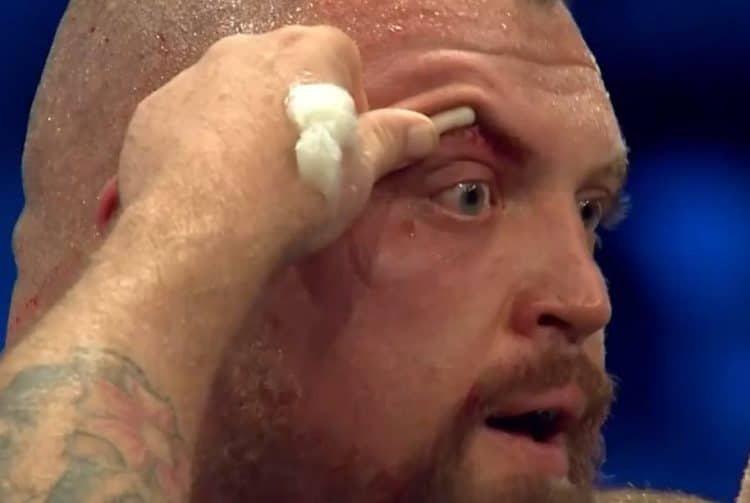 Eddie Hall needed a KO in the sixth round to win, but the complete opposite happened. Björnsson got a massive knock down and destroyed Hall’s right eye.

Thor had the opportunity to capitalize here on Eddie near the end of Round 2 but didn’t take advantage, instead, gets knocked down. Seems like Eddie’s having difficulty seeing though.. #ThorVsEddie pic.twitter.com/sRA7hF5dKU

Thor dropping Eddie Hall at the end of the 3rd but Hall gets up and makes the end of the round. Quite enjoying this! 😂 #ThorVsEddie #eddievsthor pic.twitter.com/TnSUdehfxd

Thor’s gas tank is impressive, Eddie Hall seems to be running low, but did anybody else notice Round 5 ended about 3 seconds too early? #ThorVsEddie pic.twitter.com/VpelLVCBEz

A display of respect shown between Thor and Eddie, definitely was not expecting that. 😳 #ThorVsEddie pic.twitter.com/Km8FKbRDdN

For the past few days, we got to see the scale of the dislike between Björnsson and Hall. Firstly, Eddie Hall came to Hafthor Björnsson’s gym and unexpectedly provided us with a heated face-off. That incident left one person severely injured, according to Björnsson. In addition, a few days later, in the official press conference, Hall managed to get under Björnsson’s skin, who ended up losing control and attacking him.

However, this fight has been brewing for almost 5 years, when Björnsson and Hall had a disagreement over the 2017 WSM placings. Although this played a big factor in the arrangement of their fight, it was not the main reason for it.

Eddie Hall’s greatest life achievement apart from winning the 2017 WSM was the 500 kg (1102.3 lbs) Deadlift World Record. Hafthor Björnsson wanted to get his revenge on Hall for the 2017 WSM, and the only way to do so was to pull more weight than him.

As it was not done in a live competition, Hall does as an actual record.

Following the deadlift world record, Björnsson challenged Hall to a boxing match. The match was already supposed to happen last year, but it did not come to fruition as Eddie Hall tore his bicep. Björnsson did not want to waste all of his hard work, so he scheduled the fight with an arm-wrestling icon, Devon Larratt. Bjornsson won the match with a first-round TKO. This was not Björnsson’s first boxing match, having fought against Steven Ward and Simon Vallily in exhibition bouts.

We will now be waiting for Eddie Hall to tattoo Hafthor Björnsson’s name, as that was the wager for this match. It was recently revealed that Eddie Hall will shortly come out of Strongman retirement to represent the UK at the 2022 World’s Strongest Nation. However, we will have to wait and see what Hafthor Björnsson will do next.