Bjornsson attended a posing seminar amidst talks of a boxing match 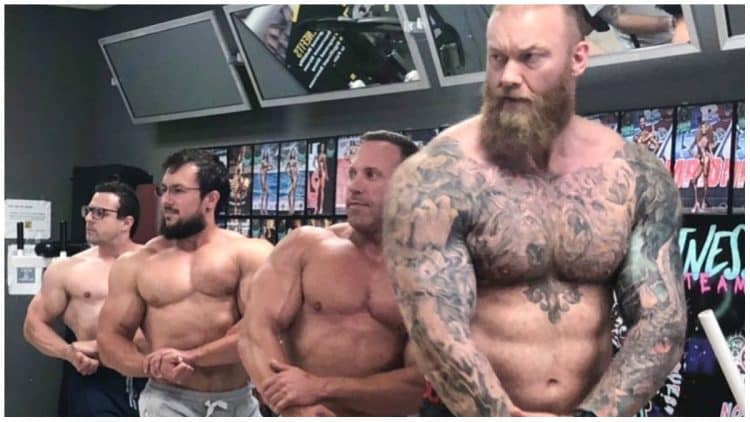 2018 World’s Strongest Man, Hafthor Bjornsson, is considered to be one of the best athletes in the history of strongman competitions. In a recent post made on Instagram, Bjornsson can be seen attending a posing seminar for bodybuilding.

Throughout his career, Hafthor Bjornsson has taken on a wide range of challenges and has met them with excellent results. His talents have led him to succeed in a wide range of fields, from acting to boxing to strongman. Bodybuilding may be next on the list, or is it purely for recreational purposes?

Bjornsson had previously expressed a desire to try out bodybuilding earlier this year in January. He was inspired after reading the book “Yeah Buddy! My Incredible Story,” an autobiography by eight-time Mr. Olympia Ronnie Coleman. Considering how successful he has been in his acting career, a move to bodybuilding might not yield him the same results as it would require a lot of commitment.

The former strongman gained popularity outside of his athletic ventures through his role of Gregor Clegane in the HBO series Game of Thrones for five seasons. His giant stature earned him the appropriate nickname of his role, “The Mountain.” He holds the all-time record for deadlift at 1,105 pounds (501 kg) and is also the only athlete to win the World’s Strongest Man, Europe’s Strongest Man, and Arnold Strongman Classic.

In March, Bjornsson decided to try his hand at exhibition boxing matches. The 33-year-old Icelander secured a matchup with fellow strongman Eddie Hall in Dubai, United Arab Emirates. “Thor” switched up his training regimen to prepare for the boxing match. He dedicated himself fully to the promotion as the two went back and forth in a heated rivalry.

After the win over Hall, Bjornsson continued to train for another outing in the boxing ring. He opened up about his struggles of not having any clear goals to work towards. Unsure of what was next, he revealed that he had not been fully devoted to his training or diet causing him to lose 13.2 pounds (6 kg).

“Posing with The Mountain!!! Not every day do you get this kind of opportunity!!!” wrote the user who uploaded the photo.

Bjornsson can be seen in the photo working on his posing routine. He appears to be gearing up for the right arm bicep flex pose from the side.

Nick’s Strength & Power took notice of the post and asked if “The Mountain” was thinking about getting into bodybuilding professionally, commenting, “Is he going to compete?”

The original poster suggested that Bjornsson did not indicate any plans to do so but that he might be able to convince the former strongman: “maybe i can talk him into it 😬.”

Former boxing world champion Tyson Fury had teased a potential outing with Bjornsson. The two well-known giants colliding in the ring would make for a great draw. Bjornsson reacted to Fury’s message in the affirmative, stating that he would definitely entertain the idea.

Fury, joined by his father John, recently flew over to Iceland to confront Bjornsson on a whim but ended up in a pub after failing to do so. Bjornsson informed them that he was in Rome, Italy at the time for the shooting of a movie. He would be willing to compete against Fury but wants him to send a contract and do things properly.