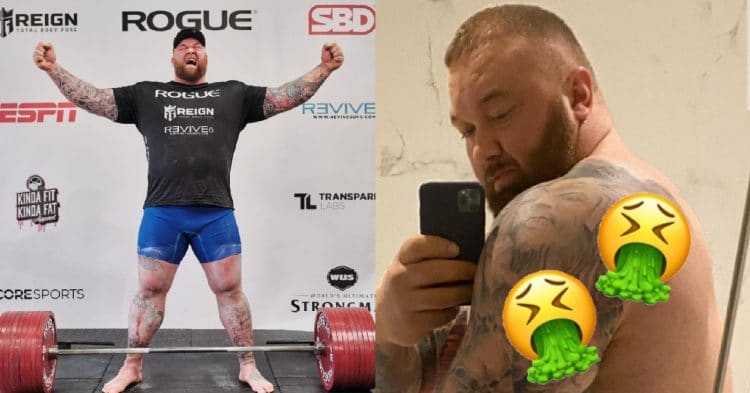 By now, you are probably well aware that Hafthor Bjornsson was able to score the world record for the heaviest deadlift of all time. However “The Mountain” revealed recently that he had a pretty serious injury that could have derailed those efforts.

There was quite the fair bit of controversy surrounding Thor’s deadlift attempt. Many people within the community felt that the record should not count, given that it took place outside of competition. Nevertheless, the attempt occurred, under strict supervision, and he secured himself the official world record for the heaviest deadlift ever, at a smooth 501kg.

However, as Hafthor Bjornsson revealed in a recent Instagram post, he nearly did not have the chance to go for the lift. He recently shared a few pictures of a nasty bruise, and explained that he suffered a torn lat that nearly forced him to not be able to attempt the record. Luckily it did not come to that, but the pictures still depict a pretty gnarly injury.

“Fun fact. Three weeks before my 501kg deadlift WR I had a small tear in my right upper lat. Luckily I recovered well right before the heavy pull but I had to adjust my training a lot because of this incident. I never really talk about my injuries… why is that? I don’t like to give people a reason to believe that I won’t succeed! 🙌🏼 Mindset is everything, tell yourself you can and you will! Set high goals and go after them. 🙌🏼🥊”

Prior to the lift, Bjornsson flirted with the idea of going as heavy as 520kg. However this injury could explain why he did not attempt to push past the 501 mark. He explains that he had to change his training, which could have prevented him from making the progress he originally planned to. Of course, he still managed to do that record setting lift while making it look easy.

What do you think of this recent revelation from Hafthor Bjornsson? Do you think he will be going for a heavier lift once he gets healed?