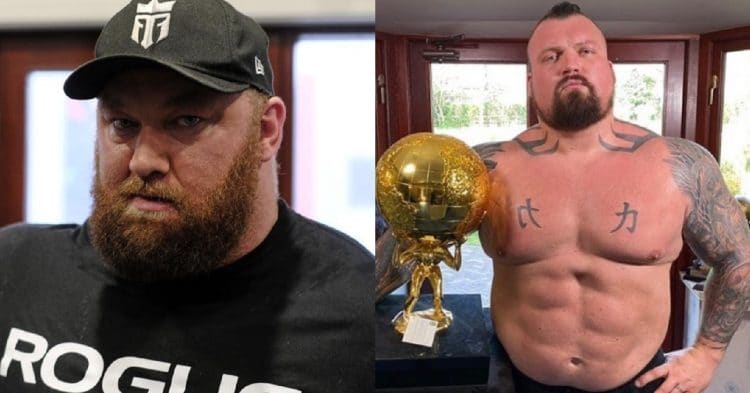 Hafthor Bjornsson may have succeeded in becoming the record holder of the heaviest deadlift of all time, but he thinks he could have done even better. Not only that, but he recently fired back at Eddie Hall for some of his aggressive comments.

Bjornsson recently set out on a mission to hit a 501kg deadlift. Although he initially planned to do it in competition, the situation in the world forced that to change to a session in his home gym, with an official referee there to judge as it was streamed on ESPN. Under those conditions, Thor was successful, easily breezing through the world record deadlift.

Throughout the whole process, Eddie Hall has been aggressively against the idea of this counting as an official record. Hafthor Bjornsson set out to break the record he had set, when he was forced to do it in competition. Nevertheless, the record technically stands official, and now Eddie and Thor are set to box next year.

As impressive as this world record deadlift was, Thor believes that he could have done better. Judging by the ease with which he pulled 501kg, it seemed likely that he could have gone further. Speaking with TMZ, he backed up this idea by saying he could have really pushed things and gone potentially as high as 520kg.

“Honestly, I can sit here and say that I could’ve pulled comfortably 510kg. That’s just me being completely honest. I do believe that I could have pulled possibly, with a grind, about 520.

“The thing people need to realize is when the weight is this heavy, every kilogram counts. Even though 501 looked easy, when you add another 9kg on it, it’s a lot.”

Then the discussion switched to the beef between Hafthor Bjornsson and Eddie Hall. He says he is focusing on himself, and training for the boxing match. However, he did respond to some of the criticisms he has been making. His answer was fairly similar to the one he gave when speaking to FitnessVolt before the lift.

“I honestly just think that he is trying to protect the thing that he had. For him, that meant a lot to him to have 501kg deadlift world record. He’s just trying everything he can to make people believe that my record doesn’t count. But, it does count. It is a world record and that’s just how it is.”

Moreover, Bjornsson disagreed with Eddie’s idea that it was easier to do this lift out of the competition.

“He can talk, and say whatever he wants. He can try to make people believe that it isn’t a world record, that it’s easier this way, but in all honesty it’s not.

“With my experience, and I’ve been in the sport more than a decade. When you compete with the crowd, that gives you an adrenaline rush, and gives you the extra strength you need to perform better. Doing it with just a referee, camera crew, weighing everything. It doesn’t feel the same.”

At the end of the day, Hafthor Bjornsson and Eddie Hall will be able to settle their beef in Vegas, next September. However it is interesting to wonder how Thor would have done, had he been able to attend the World’s Strongest Man this year.