Hafthor Bjornsson made a few big announcements and he's more excited than ever for World's Ultimate Strongman feat! 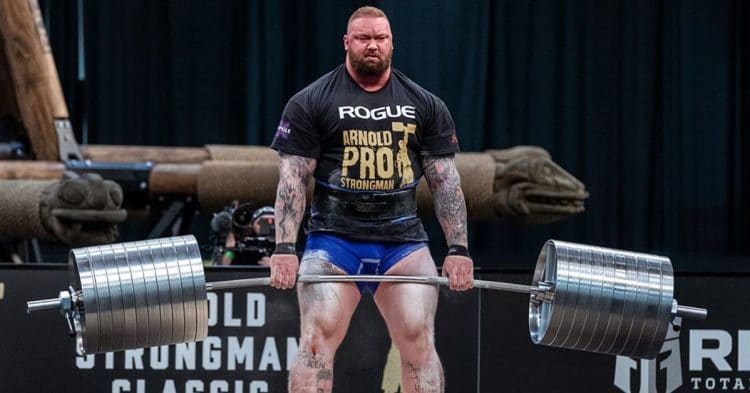 Hafthor’s Bjornsson’s upcoming world record deadlift attempt has been the subject of much attention recently. The 2020 Arnold Strongman Classic champion has had his sights set on a 501kg deadlift for a while and now he’ll finally attempt it at the World’s Ultimate Strongman on May 2 in Reykjavik, Iceland.

His decision to go forward with the lift hasn’t been without opposition, however. Several individuals feel that this record should be attempted in real competition with other athletes. But it won’t be, due to the current health crisis.

Strongman champion and current deadlift world record holder Eddie Hall was very vocal about this whole situation. He explained that he wouldn’t count the lift if not done in actual competition. So he and Bjornsson went back and forth, exchanging messages recently of which things got a little out of hand rather quickly. Then Strongman elites Zydrunas Savickas and Robert Oberst recently gave their opinion of which they also think Bjornsson should attempt the feat in a competition.

As of right now though, he’ll try to lift 501kg on May 2 and he made a few announcements recently to update everyone about the big day. He wrote the following on Instagram…

“Officially announcing @roguefitness as the 501kg title sponsor!!! So excited to have you guys on board. 19 days out from pulling the heaviest deadlift ever pulled in the history of strength sports.”

Here’s another post where he announced that ESPN will broadcast the event which is good news for fans.

“I’m so excited to announce that @espn will be broadcasting my world record attempt, live across America! It’s an honour to be able to help bring the sport of strongman forward during such unsure and unprecedented times.”

“Welcoming aboard our Official TV broadcast partner ESPN bringing Hafthor “The Mountain” Bjornsson @thorbjornsson ‘s 501deadlift World Record to millions of homes across the USA……LIVE from Reykjavik, Iceland!! We are pretty sure this would be the first time in Strongman history that a Strongman event would be televised live 💪💪 Tune in on May2nd 2020, 12 noon EST to witness the heaviest weight deadlift in human history (18 inch deadlift excluded)“

In other related news, Strongman legend Zydrunas Savickas (Big Z) has been named head judge and referee for the World’s Ultimate Strongman Feats of Strength and Records.

Now, Former Strongman champion Magnus Ver Magnusson will be the referee for the Hafthor Bjornsson’s deadlift. But then several other Strongman competitors will attempt other world records on different dates of which Big Z will be involved with.

Hafthor Bjornsson’s world record 501kg deadlift attempt is going to be exciting. It may not be received very well by certain individuals but if he breaks the record it will stand. Whether or not he’d be OK with others’ opinions about the feat though, well, that’s something we’ll have to wait and see about.

How Often Can I Do Bodyweight Training?