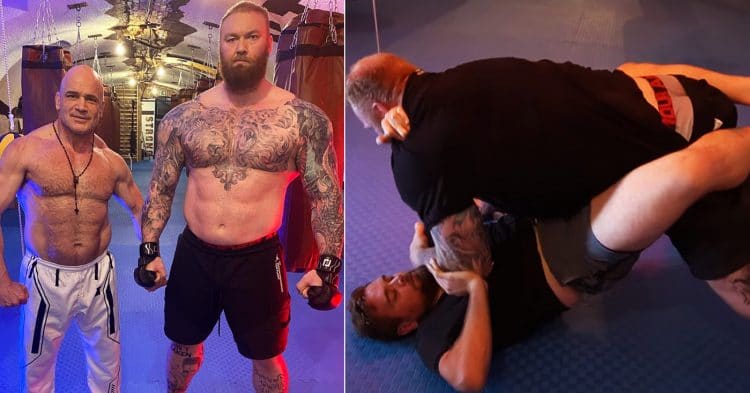 Strongman icon Hafthor Bjornsson decided to call it quits this year after a very illustrious career so that he could focus on his health and other endeavors. He’s achieved everything that a Strongman athlete could accomplish including winning the World’s Strongest Man and Arnold Strongman Classic to name a few contest victories. Not to mention, he recently eclipsed the all-time deadlift world record.

His big focus right now aside from his baby boy is the matchup between him and fellow Strongman/ foe Eddie Hall (whose deadlift record he beat) scheduled for late 2021.

It’s safe to say there’s bad blood between the two but it’s going to be a spectacle.

But in the meantime, Bjornsson will take on Pro boxer Steven Ward on January 16 in Iceland in an exhibition match to test his skills before clashing with the other behemoth in September.

So we’ll see how that goes but Bjornsson recently shared a video on his YouTube channel where he linked up with MMA legend Bas Rutten and Cage Warriors commentator and black belt Josh Palmer to practice some BJJ (Brazilian Jiu-Jitsu).

They started the session off with a little stretching and it was evident that Thor wasn’t used to doing stretches (at least not to that extent). Then it was time to start training.

First, Rutten showed Thor some kicking techniques. The former says he always aims for the logo on the shorts when he fights. This ensures he kicks the same spot every time and is much more effective for taking an opponent down than kicking several different spots (takes even more kicks).

So Thor took to the heavy bag for practice and although he looked like a fish out of water at first, he quickly improved on his technique, making proper contact on the bag with his shin.

But because he hasn’t practiced kicks before, he definitely felt it immediately.

“Obviously I’ve never done kicks before in my entire life; the only thing I’ve done is boxing and it’s crazy how much I can feel it right away in my shins.”

But he acknowledged that it’ll obviously take some getting used to.

Bas confirmed that this is certainly the case as he brought up an example of how his friend can kick a light pole and not feel anything. He doesn’t have any muscle on his shin as it’s just bone but hey, he’s a three-time champion so go figure.

The former UFC heavyweight champion then gave Thor some tips on how to throw the opponent off to maximize damage and then they continued with bag practice.

The big man was instructed to throw a few combos and knees. Well, he passed the test, and Bas thought it’d be a good idea to simulate a knockout victory with a special “greeting” that all karate guys do (watch at 7:12).

Shortly after that, commentator Josh Palmer and Thor went over some ground and pound and other techniques followed by promotional work. He even used his massive size to his advantage to give Palmer trouble but all in all, they had a lot of fun and it was a good experience for Hafthor Bjornsson.