Game of Thrones Actor and Strongman champion Hafthor Bjornsson and wife Kelsey Henson celebrate the birth of their baby boy. 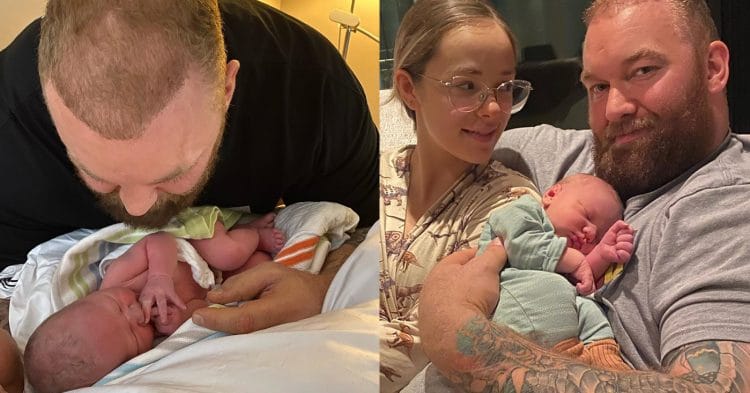 Hafthor Bjornsson’s stream of record-breaking began in every area of his life in 2017 and continues today as he celebrates the birth of a baby boy with his wife Kelsey Henson.

“the most powerful, life-changing, empowering thing I’ve ever done in my entire life.”

It will be a second child for Bjornsson, who does not talk about his first child very much, Theresa Lif, a daughter he had with Thelma Bjork Steimann. In late 2019, he revealed in an emotionally compelling interview that he had not seen Theresa in three years.  He did, however, have a chance to call his daughter to introduce her to her new brother just after he was born.

In 2018, Iceland’s 32-year-old Hafthor Bjornsson became the first Strongman competitor to win the Arnold Strongman Classic, Europe’s Strongest Man, and World’s Strongest Man all in the same calendar year. That is also the year he married his beautiful wife, Canadian Kelsey Henson.

But the 7.78lbs of joy that his wife has delivered is the only thing he is thinking about today. On September 26, at 11:19 a.m. local time, Kelsey Henson and Bjornsson celebrated the birth of their first child.

Bjornsson took to Instagram to make the announcement to his fans, telling them the excitement of every minute of the delivery, which took six hours and Bjornsson described as “short and intense.”. A name has yet to be revealed, but the tiny bundle clocked in at 7.78lbs and 20 inches long.

His excitement is palpable as he is thrilled to report:

Bjornsson shared the story of the day they met their little boy when he was woken up by Kelsey saying she had gone into labor. It started as home delivery for the happy couple, who later met their child with the help of a midwife and doula at the birthing center Bjorkin.

On his wife’s delivery, the Strongman said:

“I’m completely in awe of how strong she is. It cannot be put into words how proud I am and how I feel about this experience.”

A name has been chosen for Baby Bjornsson, and The Mountain can’t wait to reveal it all very soon.

Many fans of Bjornsson remember his stint on the HBO hit show Game of Thrones, where he appeared in the role of Gregor “The Mountain” Clegane for the fourth season, in 2013. He is the only actor to portray The Mountain for a full season and appeared again through to season eight.

This year he continues to set records and achieve significant personal and professional achievements. In May, he deadlifted 501kg, a total of 1104lbs. Just this month he also announced an 80-pound weight loss in preparation for a fight against Eddie Hall.

His 501kg/1,104lb deadlift is just two pounds heavier than Eddie Hall’s world deadlift record of 500kg/1,102lbs. This is the record that has led Bjornsson to challenge rival Hall to a 2021 boxing match, which Hall accepted, saying, “It’s on! #BackUpYourBull.” As Bjornsson preps for fatherhood to an infant, both The Mountain and Hall are prepping for a 2021 boxing match that has fans all over the world on the edge of their seats.

His fellow strongmen and strength athletes also join the celebration and offer congratulatory messages on Instagram:

Awwww that’s amazing!!! Congrats and welcome to the world to this little one!!!

Very happy for both of you! Congratulations!

HUGE CONGRATULATIONS TO YOU BOTH! 🙌❤️👶

Congratulations to the 3 of you!!!!

Congratulations guys! Awesome news. Big love to you all ❤️❤️

Congrats to you both. Amazing news