Here's a full review of Instant Knockout CUT 2.0 formula that's supposed to help you torch fat without the jitters.

The product is from the UK-based company Roar Ambition who offers a variety of performance products.

This fat burner is marketed as a shredding formula and it’s a natural, multi-ingredient supplement that is used and trusted by professional combat sports athletes like boxers and MMA fighters (hence the name). However, its use is not limited to this particular group of individuals.

They recently rebranded Instant Knockout to include the world “CUT” after the name. This came with a few changes like the addition of l-theanine that should eliminate the potential for jitters plus there’s Vitamin D3. They removed zinc, chromium, and green coffee bean, and it’s also now a vegan-friendly formula and there are no more red capsules.

The super-cool bottle design (shaped like a fist) and interesting ingredient profile had me intrigued, so I had to look into Instant Knockout for myself. So, here’s my full review of Instant Knockout fat burner:

Instant Knockout fat burner is a natural, multi-ingredient supplement that is used and trusted by professional combat sports athletes. 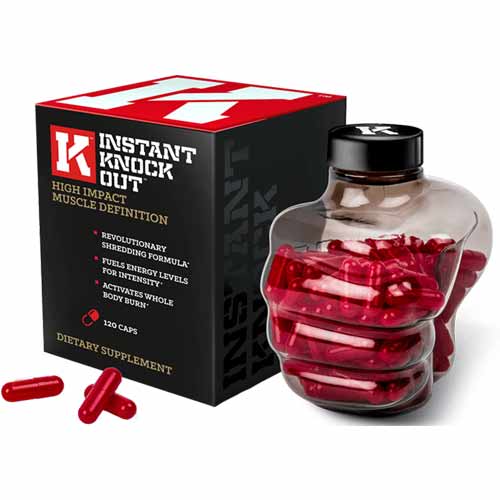 Instant Knockout CUT contains some pretty interesting ingredients and we’ve provided some research-backed evidence to show the potential benefits of each one.

First up and an ingredient that wasn’t in the original formula; l-theanine is an impressive ingredient with decent research behind it.

According to studies, this amino acid can have noticeable effects on certain factors of mental health such as stress and anxiety and it can actually increase feelings of calm (1, 2, 3).

But with the addition of l-theanine, the Instant Knockout 2.0 formula can also extend the cognitive boosting effects of caffeine that help you to zero in during your training (4). Not to mention, l-theanine can also significantly reduce the common caffeine-associated jitters.

Green tea has been used in Asia for its potential medicinal purposes for many years and there are some notable health benefits. Green tea contains polyphenol antioxidants called catechins, of which the catechin epigallocatechin-3-gallate (EGCG) is known to possess the most health-promoting properties.

Antioxidants help stave off diseases due to dangerous free radicals that damage body cells. These catechins make up most of the antioxidant content found in green tea.

Instant Knockout contains an effective dose of green tea near the higher end of a recommended daily dosage.

Green tea has several health-boosting benefits and a long history which makes it a great beverage of choice. Check out our review of the 12 Best Green Tea Brands on the market.

Because green tea extract does naturally contain caffeine, it should contribute to enhanced mental alertness. Not to mention, caffeine boosts energy levels as it’s a nervous system stimulant and to date, there’s really no ingredient better for this purpose. Green tea typically contains less caffeine than like a cup of coffee though but it still contains it at noticeable levels.

According to research, the combination of caffeine and catechins in green tea help to burn more calories. Although, one study determined that the mechanism by which these compounds have this effect may be explained by thermogenesis, fat oxidation, or both. (5)

The catechins in green tea may have positive effects on insulin sensitivity, heart health, brain health, exercise performance, recovery, and possibly even cancers.

Cayenne pepper is a popular food used to spice up dishes but there are health benefits to be had with these chilis mainly due to the active ingredient, Capsaicin, which gives the spiciness.

Cayenne also contains a respectable amount of health-promoting antioxidants. One tablespoon of cayenne contains 44% vitamin A, 8% vitamin E 7% vitamin C. Plus, it provides a little vitamin B6, vitamin K, and a few other key nutrients in small amounts.

Pepper has long been believed to contribute to weight loss because the spice can have metabolic-boosting effects. Cayenne induces a small thermogenic effect, therefore, leading to more calories burned. (6)

However, this effect is nothing to write home about as you’d be better off focusing on a good exercise and diet regime if you’re looking to improve body composition.

But it’s also important to note that cayenne has been shown to reduce appetite which would have an even larger effect on weight loss and obesity management. (7, 8, 9)

Cayenne may be a therapeutic ingredient for reducing cancer risk, improving digestive health, and possibly lowering blood pressure, although most studies have been done in mice for potential heart health benefits. (10, 11, 12)

There’s no recommended serving for cayenne pepper although 100mg is within a safe and effective range.

Glucomannan is a water-soluble fiber from the konjac root or elephant yam, which is added to many food products including as a food additive.

Glucomannan also feeds gut bacteria and a healthy gut is associated with a healthier weight. (14, 15)

In fact, this was the case in a large and prominent study of 176 overweight individuals who took Glucommanan with a 1200kcal diet for five weeks. The Glucomannan group experienced much more weight loss compared to a placebo group. (18)

This is promising evidence for using Glucommanan as a weight loss aid. However, a restricted-calorie diet is also always necessary.

Other factors of health

Research shows that Glucomannan may also be beneficial for heart health by reducing cholesterol and triglycerides, while also lowering fasting blood sugar which means it can help to reduce the risk of developing Type 2 diabetes. (19)

Glucomannan is also a great option for helping to treat constipation. (20)

Overall, Glucommanan seems to be an effective option for supporting weight loss.

Caffeine is a nervous system stimulant that has shown to increase calorie expenditure, therefore, it may also help with the weight/fat loss process. It’s also the most effective ingredient in any product for providing unparalleled energy.

Instant Knockout contains a powerful dose at 300mg per serving which is actually on par with many pre-workouts. If you can maximize that increase in energy, you can definitely burn more calories.

Black pepper extract contains a compound called piperine which is commonly used in supplements to improve ingredient absorption such as the compounds in green tea, for example.

But black pepper also contains antioxidants and has anti-inflammatory properties. (21)

There may be other potential benefits, although studies have been mostly in rats and via test tubes.

Although one study in 86 overweight humans found the piperine in addition to epigallocatechin gallate and capsaicin significantly improved insulin sensitivity over 8 weeks. However, because there were multiple ingredients used, it wasn’t determined that black pepper can have this effect all on its own. (22)

But the good thing is that Instant Knockout contains the other ingredients in the study, therefore, we could say that this is an effective ingredient combination.

Can Instant Knockout Cause Side Effects?

There’s a decent amount of caffeine in Instant Knockout from the caffeine itself to the additional caffeine contained in some of the other ingredients. If you have not built up a solid tolerance to caffeine, it could cause some undesirable side effects such as nausea, dizziness, palpitations, anxiety, fatigue, etc.

Yes, the doses are split up but for someone new to caffeine, there’s a good chance that it may potentially cause a few of these side effects.

You also don’t want to pair Instant Knockout with other caffeine or stimulant-containing products.

Individuals with health issues or who are taking medications should consult with a doctor prior to use.

How To Take It

Per the product instructions, you should take 1 capsule with a glass of water four times per day. More specifically, they recommend you take one cap first thing upon waking and before breakfast, the second in between breakfast and lunch, the third an hour after lunch, and the last capsule an hour before dinner.

They also suggest taking a serving no later than 5 hours before bedtime.

Instant Knockout may cost a bit more than a lot of people would like to spend on a fat-burner. But it’s certainly not the most expensive product in its category. Here’s the pricing information.

As you can see, the best option is the 3-month supply because you get a free bottle and free shipping anywhere. This brings the cost per bottle down significantly compared to the other two options.

One bottle is $59 plus shipping and although not cheap, this is the best option if you want to test it out to see if you like it before committing to a 2 or 3+1 month supply.

Instant Knockout fat burner is a natural, multi-ingredient supplement that is used and trusted by professional combat sports athletes.

Is Instant Knockout CUT Worth The Buy?

The ingredients in Instant Knockout CUT have shown to support the weight loss process by speeding up the metabolism, boosting fat oxidation, and suppressing appetite.

Ingredients like caffeine, green tea, cayenne, and Glucomannan seem to be an effective recipe in this formula. Not to mention, there are several other ingredients that we also like especially with the addition of L-theanine.

This 2.0 formula also enhances physical and cognitive performance so that you can train harder and longer, and feel good afterward too.

Instant Knockout CUT is definitely worth adding to your regime if you’re doing everything else right and looking for a nice boost to help you reach your goals faster.

Check out other fat burners:

Instant Knockout CUT is a knockout fat burner and a weight loss product that could potentially help to improve body composition. We say potentially because you need a good exercise/training and diet regime for any supplement to do its job (it’s a two-way street you know).

There’s a potent combo of fat-loss and performance-supporting ingredients in this formula that will no doubt do the trick.

This review was updated by the editor to reflect the new re-branded version of Instant Knockout fat burner.

Instant Knockout is a great knockout weight loss product that could potentially help to improve body composition. However, it's up to you to achieve your desired results which means you need a good exercise/training and diet regime.

The Liquid Diet: Uses, Benefits, and How It Works