A complete underdog story unfolded this weekend at the Europe's Strongest Man, as the debutant scored his first big win 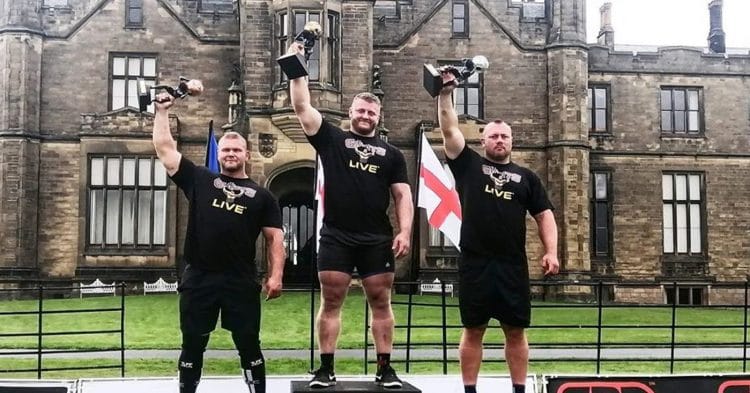 Well, well, well….talk about expecting the unexpected. This weekend’s ESM contest was plagued by athletes pulling out due to injuries, retirements, travel restrictions, or preparations for WUS’ second season of feats of strength. However, this meant the up and comers could perhaps shake some things up and score a big win. Which is exactly what happened, with Luke Richardson scoring a major trophy at only 23 years old in his second pro Strongman show.

Also, if I am not mistaken this is the first International Strongman show that’s taken place since these pesky lockdowns started to take place. Of course, since it was held without an audience it was seriously lacking the spectacle factor but the guys are pros and they did their job. At this moment, there is still not a lot of information about who were the winners going event by event but some information did get out from the official “Giants Live” page.

The grip titan, Mark Felix, set another Hercules Hold record, shattering the previous one he set last year. At the 2019 Europe’s Strongest Man he held the Hercules Hold for 87.52 seconds and this weekend he held it for 92.37 seconds with plenty of left in the tank. Some guys are just born with an industrial level hydraulic press in their palms. If Mark continues his reign of terror in the Hercules Hold events, I would really suggest that the event be renamed “The Felix Hold” at for the Giants Live events. He deserves to be part of history.

Next up, is last year’s Britain’s Strongest Man, Graham Hicks. Graham has been an up and comer for some time now and he’s always somewhere around top 5 with placings differing depending on the competitors line up. Graham is part of a growing list of Strongman who are specializing in the log lift with dreams of being the first guy not named “Big Z” to set a log lift world record. Luke Stoltman, Rob Kearney, Rob Oberst, Iron Biby, and Hixxy all guys capable of pressing +220kg overhead. Hixxy was aiming for a new British log lift record of 220kg which he lifted fairly easy. After he was done with that he tried his hand on a world record of 230kg but he just didn’t have it in him this time. Hixxy will have to wait for another contest and try his luck.

WATCH: Graham Hicks SMASHES the 220KG British Record and goes for 230KG to beat Big Z's World Record – can he do it?

And lastly, we have the newly crowned King of Europe, the British rookie Luke Richardson. I think it’s safe to say Luke surprised everyone by winning in his first big international show. Obviously it helped that Thor is getting ready to beat Eddie Hall and guys like the Stoltman brothers and Mateusz Kiels aren’t competing for various reasons. However, that’s not Luke’s problem, because he trained his ass off, came to the event with the intention of winning and did so. Everything else is just pure speculation and Captain Hindsight vision. Luke Richardson is very young and has a lot of potential for growth. The next big event with some name value competitors(Shaw, Mateusz, Martins, Stoltmans) will show where ranks among the best and how fast can he catch up to them.

The first major Strongman competition of the new season will be the 2023 Britain’s Strongest Man, which will take place...

The first World's Strongest Man competition was held in 1977 and was won by Bruce Wilhelm, who probably unknowingly made...