Despite losing over 15 kg (33.1 lbs), Jackson Powell is still going very strong in the squat event. 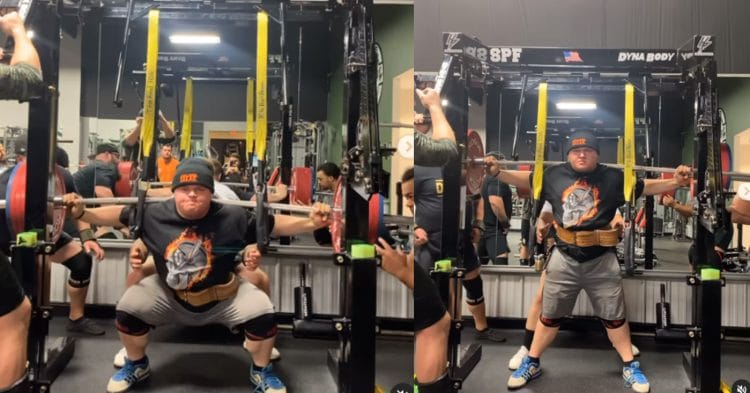 One of the biggest rising stars in the sport of powerlifting, Jackson Powell, continues to impress in the training room. He is known for his squatting abilities, frequently lifting some serious weight. Jackson has done a few heavy squat sets in his latest training session and published the video on his Instagram account.

In the post, Jackson showcased a squat triple of 317.5 kg (700 lbs), which was done with ease. Lifting accessories he used for the lift were only a lifting belt and knee sleeves. In the second slide of the post, Jackson is seen doing paused squats of 295 kg (650 lbs), also for three fast repetitions.

You can watch the squats here:

Jackson has lost a lot of weight compared to his competition shape and looks very impressive. Just 10 days ago, he posted a bodyweight update, stating that he weighed in at 137 kg (302.6 lbs). For context, in his last competition, Jackson’s bodyweight was 154 kg (339.5 lbs).

Jackson Powell is born to lift heavyweights. He has not been competing for long, but his feats of strength have grabbed the attention of many fans. His interest in the sport began when a few people and coaches realized the potential he has. Baylor School strength and conditioning coach Dave Reynolds expressed his thoughts on Jackson.

“His levers, his arms and legs, and the positions he can get into make him perfect for powerlifting… I told him what he has is a gift from God,” said Reynolds.

Jackson Powell’s first major competition came in September 2021. He competed at the 2021 WRPF Bucked Up Showdown, where he grabbed an impressive third-place finish in the 140+ kg category. His lifts at the competition were:

Except the squat event, all of these lifts are his current competition PRs. Jackson’s heaviest raw squat is 410 kg (903.9 lbs), which he has done at the 2020 SPF Gritmas Classic. This squat is the All-Time Second-Heaviest Squat in the Teen 18-19 division

Jackson’s greatest achievements came in the Teen 18-19 division, and seeing that he is still 19-years-old, he could find some more success in the division. Nonetheless, Jackson is a serious competitor in the open division, and soon enough we will see him compete against the greatest athletes in powerlifting.