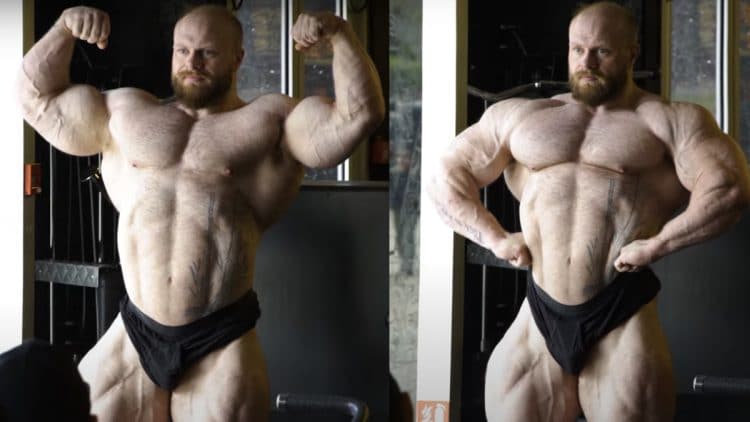 IFBB Pro bodybuilder James Hollingshead recently shared an intense shoulder and triceps workout. Hollingshead is the Open division competitor from The UK. He last competed at the 2021 Olympia and finished 12th. He recently went through an intense shoulders and triceps workout under the guidance of coach Patric Tuor. The focus of this workout was front and side delts along with triceps.

Hollingshead went through the intense workout with high intensity and also shared the off-season physique update. The Brit is currently standing in the 300lbs range and has cut down on his food intake due to digestive issues. However, the 2020 Europa Pro winner is in a great place mentally. The video of his shoulders and triceps workout session was uploaded on his YouTube channel and here is the summary of the session.

“I’ll highlight something. This Smith Machine is pretty damn heavy. I’ve used many Smith Machines in my time, some heavier than others. This was one of the heavy ones,” James Hollingshead admitted.

They increased the weight by 20kg (44lbs) for the second set and performed it with multiple drops without rest periods in between. As the set progressed, Hollingshead performed multiple drops to failure as his teammates removed a weight plate each time he performed the mini-set to failure.

Hollingshead next took to this isolation movement that targets almost every muscle in the shoulder region. An aesthetically perfect physique has the wide back capper with even wider and a rounded pair of shoulders. Side lateral raises are an effective way to impart that look to your shoulders. The Open Pro competitor performed a warm-up set with lighter dumbbells in the beginning.

“The principle we followed, push those dumbbells out and lift them up,” James Hollingshead said.

For the first working set, Hollingshead used extremely heavy dumbbells and performed partial reps. He dropped the weight for subsequent sets and performed the sets with a full range of motion to ‘fire those fibers’ in the shoulders.

The Brit next went on to perform the cable machine variant of side lateral raise. Again, the weights are easier to control with the machine. Therefore it is safer than free weights in terms of avoiding injuries. While explaining the technique modification for this movement, James Hollingshead said:

“So we’re doing the side cable lateral now with a slight difference in that we’re not bringing it just parallel with our body. We’re aiming to bring the elbow slightly behind the ear. This just helps you recruit a little bit of rear delt as well as lateral head.”

Hollingshead further explained that they targeted anterior and side delts for this session. Therefore this variation of the movement was a great way to get the blood flowing into the rear delts without activating the muscle too much. Hollingshead was satisfied with the movement as it ‘hit the shoulders’ really well.

Superset – Converging shoulder press and dumbbell side to front raises

James Hollingshead performed converging shoulder press with a slow and steady tempo. He avoided locking out the elbows to purposely keep the shoulder muscles under tension throughout the duration of the set. This also helped eliminate triceps muscles engagement from the movement.

“No rush. We’ve already done the explosive reps in the beginning with the first exercise. So now it’s just about keeping that tension on… really taxing the shoulders directly,” James Hollingshead said.

Immediately after the set, he performed the second half of the superset – dumbbell side to front raises – with 10kg dumbbells as his shoulders fatigued due to the previous heavy sets. This superset served as the finisher for the shoulder workout as James Hollingshead shifted his attention to the triceps workout.

James Hollingshead started the triceps workout with triceps push-down. Most arm movements involve the elbow joints and it is extremely important to warm up the elbows for every arms workout. Triceps push-down is an efficient way to warm up the triceps muscles with extension as well as the elbows. Instead of the straight bar, Hollingshead used the EZ bar and explained the reason behind it:

“It’s just very comfortable for the wrist. If someone has a little bit of discomfort in your wrist using the straight bar, then just use the EZ attachment. You’re going to get the same direct load on the triceps with a more comfortable hand position.”

James Hollingshead next performed the overhead extensions with V-bar. The movement focuses on the long head of the triceps and activates the core, glutes, and lower back muscles. Hollingshead performed the movement with a 5-second eccentric phase. Performing the eccentric phase at a slow and steady pace increases the amount of time the muscle is under tension. Therefore it helps to bring about hypertrophy more effectively.

“I love overhead movements because you get that stretch on the triceps you just can’t get from many other exercises. So I think it’s really important to include a direct overhead movement especially if arms are not a strong body part for you…” James Hollingshead said.

He further admitted that his arms are not necessarily perfect. However, training them properly for all ranges of motion and the right amount of load can really make a difference.

In simple words, dumbbell skull crushers are a lying down version of overhead extensions in terms of range of motion. It is a compound movement as the triceps work in conjunction with the pecs and rear delts to push the weight up. Therefore, this movement is believed to improve the bench press strength along with triceps.

James Hollingshead had a playful posing session after the workout and closed the video with a physique update.