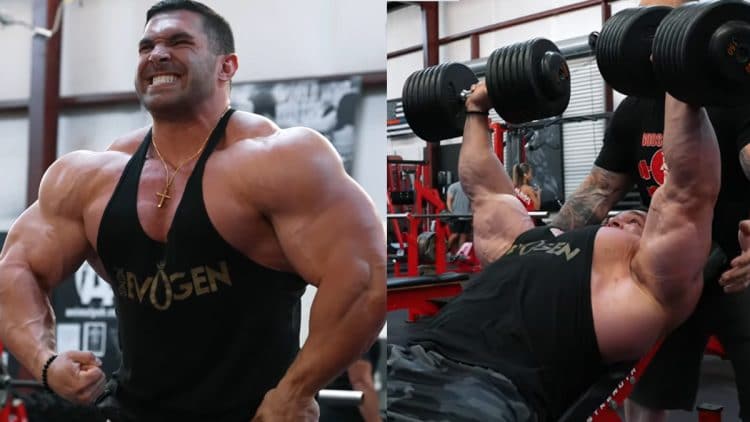 Olympia 212 champion Derek Lunsford recently shared a chest workout. Lunsford is currently traveling in Georgia for an NPC bodybuilding show and expo. However, that did not serve as an excuse for the 28-year-old to skip or take a break from his training. Lunsford earned his IFBB Pro card with a first-place finish in the Light Heavyweight division at the 2017 NPC USA Championships. He then announced his arrival in the Professional bodybuilding circuit with a win at the 2017 IFBB Tampa Pro in the 212 division. After consistent top-five and runner-up finishes at the Olympia from 2017 to 2020, Lunsford finally captured the Olympia 212 crown at the 2021 Olympia.

Derek Lunsford will attempt to make it two in a row at the 2022 Olympia which will take place from December 16th to 18th in Las Vegas, Nevada, USA. Lunsford’s off-season training to retain his Olympia 212 title is going on in full force and he recently shared a chest workout from Georgia on his YouTube channel.

Derek Lunsford started the chest workout with standing cable chest fly to get a good warm-up before starting with the more intense movement. He cranked out 15 reps in the first set and then moved on to the next movement after this. The handles used by Lunsford for this movement were noticeably different than the standard rope or D-handles.

The cylindrical-shaped metal handles have a smaller diameter towards the thumb and index finger while it goes on increasing towards the little finger. This way, the shape of handle mimics the way our fingers wrap while gripping and allow a better grip. Lunsford completed one more set of this movement and went on to perform the next exercise.

Derek Lunsford next performed one of the most common movements to build the upper pecs – the incline dumbbell press. After the first set, Lunsford performed the second set with 130lbs dumbbells and managed to get ten full reps in without assistance from the spotter.

As expected, the 28-year-old used 150lbs dumbbells for the third set and managed to reach eight reps with his training partner’s encouragement and support.

Derek Lunsford performed another pressing movement after the dumbbell press. The first set on the Arsenal machine included ten reps with moderate weights. Lunsford completed another set of 12 reps on the machine. While the weights used for these sets did not appear too heavy, Lunsford had to work really hard to get the last few reps. While explaining the reasons behind this, Derek Lunsford said:

“This machine is no joke that’s why in the beginning I said I wanted to use it. I have used this machine before not too many times but I know how hard it is – especially with the (parallel grip similar to hammer curls). But I find it really effective on the chest so I wanted to do it.”

Derek Lunsford performed Pec Deck Fly after a couple of pressing movements before. However, the movement was slightly modified to isolate the chest muscles to a greater degree. After performing a few reps with both arms in each set, Lunsford performed the remaining reps in those sets with single-arm while keeping the arm stationary in the front position.

“You better be seeing improvements in my chest this year. You bettr believe it. It’s not like me to make large claims like that but I have been putting in the work,” Derek Lunsford said after finishing the sets.

This movement was relatively new for Derek Lunsford as he admitted to not have attempted it before. He performed the straight-arm cable pull-down with single arm and used the same handle that he used for the standing cable chest fly.

“(Feels like) a little cross-body and like the lower pec,” Derek Lunsford said after the first set.

This movement served as the finisher for the chest workout. After a playful posing session, Derek Lunsford performed triceps push-downs on the machine to end the day.

“I didn’t think it was going to be a good day but I am feeling pumped! This atmosphere is motivating, you know!” Derek Lunsford said at the end of the workout.

10 Ways to Un-Stick a Training Rut