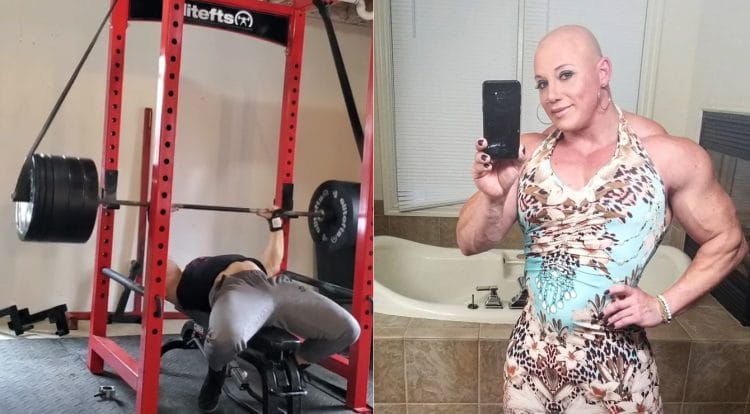 You may be familiar with Janae Kroc, a trans/genderfluid/nonbinary bodybuilder, and powerlifter who has received a lot of attention and criticism for her decision to transition and compete in men’s divisions. Back in July, Kroc revealed that she’d be competing in bodybuilding again in an effort to earn an IFBB pro card after being ‘outted’ in 2015.

Well, Janae Kroc has been training diligently to improve upon her physique and strength progress, and she recently posted a training update on Instagram detailing the deload week she frequently does to avoid overtraining.

Here’s what Kroc wrote to accompany the video…

“I haven’t posted much training in a while so here’s a little bench work from today. Today is my deload weak/high volume day where I do 5 sets of 10 on bench then some assistance work afterwards.

I performed 3 warm up sets then did reverse band bench 415×10 for 5 sets followed by 3 sets of inclines, 3 sets of dumbbell bench, and one set to failure of body weight stretch pushups. I deload once every four weeks to prevent overtraining, give my joints a break, and to include some hypertrophy work.”

“Since I know people will ask why I use the reverse band setup….. Right now the biggest reason I am using them is because it takes pressure off the shoulders and pec tendons at the bottom of the lift and helps prevent injury.

Bands are also very useful for strengthening your lockout, teaching you to push explosively off the chest, and pushing past mental barriers by allowing you to use heavier weights than normal. They have been one of my favorite assistance exercises for increasing my bench press for a long time.”

In November, 7x Mr. Olympia Phil Heath and fitness personality Mike Rashid stepped into to defend Janae Kroc who was being bullied on the internet. And it’s really unfortunate to see but at 47, Kroc isn’t letting the negativity interfere with her goals and ambitions.

Janae Kroc, who previously competed in powerlifting (record-holding) and bodybuilding, came out as transgender and genderfluid in 2015 (she also...

Born Matthew Kroczaleski, the transgender bodybuilder and powerlifter will be looking to make a return to the bodybuilding circuit in an effort...