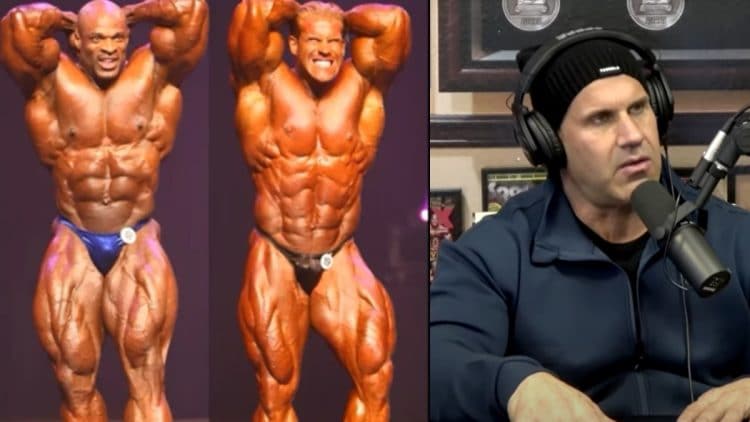 Bodybuilding legend and 4-time Mr. Olympia winner Jay Cutler reignited the memories of his epic rivalry with 8-time Mr. Olympia winner Ronnie Coleman in the 2000s era. Coleman and Cutler shared the Olympia stage a whopping eight times and became synonymous with the clear best and second-best bodybuilder for over half a decade. On the most recent episode of the Cutler Cast podcast, Jay Cutler and Manager Matt spoke candidly about the rivalry.

The topic came for discussion as Jay Cutler recently posted a picture of him and Ronnie Coleman posing on stage at the 2001 Olympia. The event marked Ronnie Coleman’s fourth straight Mr. Olympia win. Also, it marked Jay Cutler’s entry into the top three of the Open Pro division as he finished second that year – a 6-place jump from his eighth-place finish the previous year. While explaining the circumstances surrounding the moment captured in that picture, Jay Cutler said:

“This is the 2001 Olympia at the Mandalay Bay Arena, I competed at Mandalay Bay for the first time in ’99 but this was 2001 we’re still competing there. And this is I said the beginning… when your idol becomes your rival. I’ve often said that quote because I idolized Ronnie Coleman like he was the guy that I… I started with Dorian Yates and then of course… Ronnie won the Olympia and that was the guy I followed. But this is actually when I got to stand toe-to-toe on US territory…”

Jay Cutler further stated that Ronnie Coleman and he had consecutive competitor serial numbers in the year 2001. This led to them posing side-by-side on stage and eventually became Jay Cutler’s coming out party. Cutler feels that it was one of the primary reasons that the judges could notice him and bring him to the forefront of competition.

It definitely carries weight right? But in this circumstance, I was eighth the year before… And here I was placing top two,” Jay Cutler said.

Will there be another rivalry like Ronnie Coleman vs Jay Cutler?

Ronnie Coleman and Jay Cutler were the perfect dance partners at the time in bodybuilding. While Ronnie was one of the most dominant champions in the history of the sport, Jay was a young up-and-comer that had youth on his side to make improvements each time they met on stage. Cutler kept giving Ronnie a run for the money for five years straight and eventually dethroned the champ in 2006.

The construct of this rivalry makes it one of the most intriguing and unique competitive rivalries of all time. Ronnie Coleman and Jay Cutler’s respectful demeanor despite fierce competitiveness year after year and sportsmanlike behavior elevated it to the whole new level too.

Continuing further in the podcast, Jay Cutler wondered if another rivalry of such proportions will ever occur in bodybuilding.
Manager Matt seconded Jay Cutler’s thoughts and said:

“No. Because there is never someone who… I don’t see anyone right now that’s that dominant like Ronnie was and there wasn’t somebody that was coming up coz you were still in your twenties there.

What are your thoughts on this? Who do you think can surpass Ronnie Coleman vs Jay Cutler’s rivalry among active bodybuilders?

Courtesy of the Cutler Cast YouTube channel, you can watch the full podcast episode here: