Legend Jay Cutler Reveals His Steroid Cycles To Answer a Hidden Question: ‘What Do the Pros Take?’ 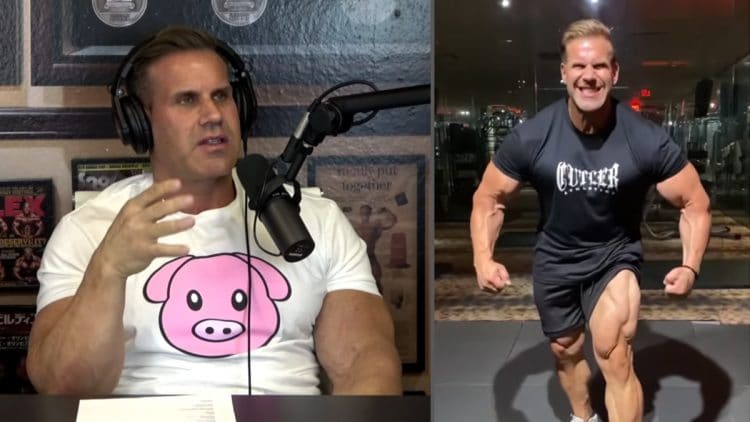 Bodybuilding legend and four-time Mr. Olympia winner Jay Cutler shared his steroid cycles. Bodybuilding is an extreme sport and a lot of athletes use performance-enhancing drugs to make additional gains after reaching their natural potential. Irresponsible use of these drugs has also shown to have caused negative effects on the health of many bodybuilders. Some of the recent deaths have also been attributed to PED/steroid use. While most of us are aware of the fact that PED use is an integral part of competitive bodybuilding, very few elite competitors prefer to discuss their use on an open platform.

During a recent interview with Greg Doucette, Jay Cutler shed light on his relationships with steroids. Cutler chose to speak about the topic due to the prevalent misconceptions and said:

“There’s a lot of misconception on what we actually do. I have never really spoken about it to be honest and I just think in this era it’s kind of like the hidden question that people want to ask, “Hey, what do the pros take?”

To start the discussion, Greg Doucette stated that even the local level bodybuilding competitors presumably take heavier doses of PEDs compared to a high-level competitor like Jay Cutler. Doucette specifically asked Cutler what substances and doses does he take now versus the highest point of his career.

Jay Cutler responded that he is on a ‘Real HRT’ (Hormone Replacement Therapy) right now and tried to clear the misconceptions about the concept of HRT.

“I know people that say I’m on HRT and I’m taking 500mgs. No one needs 500 mgs on HRT, okay? I think really everyone’s HRT comes from the doctor that’s prescribing your HRT. Meaning, I am not doing myself HRT. I’m going for blood work. I give blood every eight weeks. I think it’s always healthy for you to do that. I’ve always done that.” Jay Cutler said.

Jay Cutler added that his ex-wife was a nurse practitioner and made sure that they were conscious about maintaining good health while on PEDs. Cutler keeps a check on his health and stated that the last time he checked, his testosterone levels were in the 640ng range.

“I take a half cc to a full cc usually a week and that right has switched around. I rarely gone over one. This is my first cycle to be honest. I did one cc Sustanon. I think they were preloaded Sustanon from Mexico. They were the best things. I mean I put on like 50lbs,” Jay Cutler said.

Jay Cutler then went on to shed light on his steroid cycle during his bodybuilding career. Cutler gave a detailed account of his cycles and revealed what he took on and off-season.

“I’ll be honest, off-season, I didn’t take as much. I didn’t do GH (Growth Hormone). I would always take like 500mgs a Test and I would use 600mgs of Equipoise. Equipoise was my favorite off-season. I didn’t do a lot of orals and once in a while I dabbled. Well, in the beginning I did my Anadrols and my D-Bols mixed with Testosterone. I used Deca (Deca Durabolin). I wasn’t a fan of Deca.”

Jay Cutler said that his biggest challenge during the competitive bodybuilding career was to get the ‘exotic drugs’. According to him, Exotics were the substances that bodybuilders compulsorily needed to use for the show.

“Coming now and realizing a lot more than I realized back then, I don’t know if I really needed to buy The Winstrols and Anavars… I was using Parabolan… There wasn’t a lot of years that Trenbolone was apparent for me… Later on I got into Insulin stuff and that kind of additive but I did that way later.”

“My cycle would basically be – off-season I would use Testosterone and Equipoise. I would do that consistently for ten weeks but the difference is that I actually came off drug. There was no bridge, there was no ‘oh, I’m cruising.’ That’s just nonsense to me. We came off and I would do a cycle for ten weeks, come off for ten weeks.” Jay Cutler added.

Jay Cutler then spoke about the steroid cycle during the competition prep. The details he shared are that of his career between the years 2000 and 2004.

“Then certain things I would start with Testosterone in the Equipoise for the contest and then every four weeks I would kind of change it. Then I would switch to Propionate instead of Enanthate. The biggest difference I learned later is that anti-estrogens,” Jay Cutler continued.

“Everything’s kind of like Kamakaze thinking like “Oh, this drug works good for me.” Like I’d try it. But the truth is that my max – of course the GH should be added in when I would train for the contest. I remember the first dosage was 4IUs a day and I’ve gone up to nine, twelve on and off. I think nine was probably the best sitting area for me.”

People generally use insulin in medical context. However, bodybuilding is an extreme sport and many competitors use the drug for the muscles to absorb nutrients quickly after training. Jay Cutler admitted that he ‘toyed’ with Insulin as well. However, stopped using it in 2004 and ‘absolutely never used it again.’

Courtesy of Greg Doucette YouTube channel, you can watch the full interview here: