Jeff Cavaliere and Dr. Andrew Huberman linked up to discuss 'bro splits' and other workout splits that are best for building muscle. 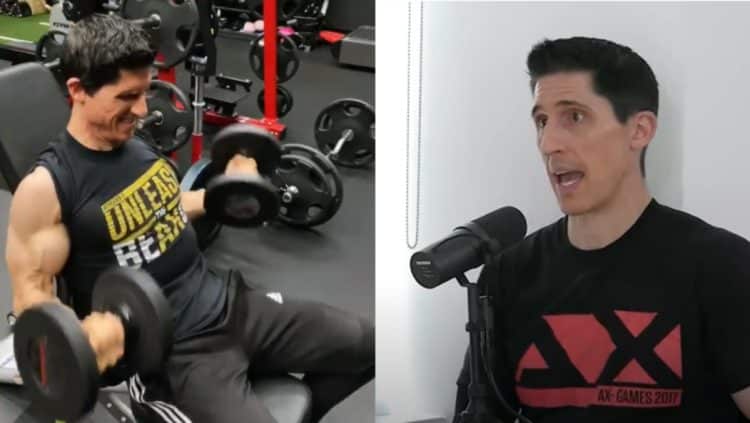 When it comes to splitting up a workout, there are a number of ways to get the job done, but fitness guru Jeff Cavaliere and Dr. Andrew Huberman believe results are what matter most. In a recent video, Cavaliere opened up about workout splits and how to produce results with different exercise programs.

Jeff Cavaliere is a fitness guru with a wealth of knowledge and routinely shares proper lifting techniques and workout regimens on social media. He plays a major role at ATHLEAN-X, a fitness workout company that promotes active and healthy living.

Exercising can be as nuanced as someone makes it, and Cavaliere believes anyone can achieve results regardless of their workout plan. Nowadays, bodybuilders and fitness influencers alike train using workout splits. Dr. Andrew Huberman joined Cavaliere for a candid discussion centered around these various methods. As a successful neuroscientist, Huberman brings a unique perspective to any fitness dialogue.

Training or workout splits refer to the way in which someone approaches different muscle groups during exercise over a period of time. These methods vary greatly, and many people divide their workouts based on the day of the week or by the body part. Oftentimes, people try to hit a single muscle group at once, though there are plenty of circumstances when athletes decide to group-specific muscles together in order to condense a workout routine.

Jeff Cavaliere on Workout Splits: “I Don’t Care How Effective the Split is, A Split Not Done is Not Effective”

In a recent YouTube video, Jeff and Andrew discussed workout splits at length and what methods work the best for building muscle.

“For me, the first rule is, will you stick to it? Right, because I don’t particularly like full body splits. I don’t necessarily like to have to train everything. Now, of course the volumes will come down per muscle group but if you don’t like to do that and you actually don’t look forward to your workout because you’re dreading having to do everything and feeling too maybe fatigued by the time the workout is over, or the fact that those generally do take a little longer and don’t fit into your schedule.” Jeff Cavaliere told Dr. Andrew Huberman.

According to Jeff Cavaliere and Huberman, there are rules that govern workout splits. Whether someone uses a workout split based on body parts or based on the day of the week, what’s most important is actually completing the exercises.

“I don’t care how effective the split is, a split not done is not effective. So, you need to find one that fits. Maybe you go into an alternative option like a push, pull, legs like you mentioned. That could be done maybe one cycle through the week, a Monday, Wednesday, Friday split or it could be twice in a week, so you’re actually training six times where you repeat it. Push, pull, legs, however you want to do it.”

Cavaliere explained that sometimes splits are divided into specific movements or parts, like pushing, pulling, and legs (PPL split).

Huberman and Cavaliere underlined that bro splits divide body parts up throughout the week. The fitness guru says bro splits work effectively because there is ‘synergy between exercises’ from day to day.

“You can go back to the bro split days. Those still work effectively. There’s a reason why they worked in the past. I think that science shows that there are smarter ways to do them these days. You can come back and hit a related muscle, so you can do biceps on one day and then come back two days later and do back.

Realizing again, that there is synergy between the exercises there. Your biceps are going to get restimulated again. You can make that work. They get their pump, they feel pretty good, it’s solely focused on one muscle group” Cavaliere explained.

Cavaliere believes as long as ‘you’re sticking to it’ and seeing results, the split is working. He added that a lot of people struggle with different exercises until their second or third set because their bodies are unfamiliar with new movements.

“It’s perfectly fine to do a bro split in that instance if you’re sticking to it again and you’re seeing the results you want to see from it. They are able to keep their focus on one muscle. A lot of times people struggle with the way an exercise feels until their second or third set. They don’t have the proprioceptive ability to lock in on an exercise.”

Given his knowledge and expertise surrounding the topic, Cavaliere’s opinions are highly favored in the fitness community. However, in 2020, he attracted some unpleasant publicity after allegedly being caught deadlifting a fake 495-pound load. YouTuber Scott Herman demanded Cavaliere apologize, but Cavaliere never addressed the topic publicly.

RELATED: Is Split Workout or a Full Body Workout Better for Building Muscle?

Despite the snafu, it’s evident that Cavaliere understands the finer details of exercise, especially as far as workout splits are concerned. The fitness guru is confident that ‘bro splits’ work fine but underlined how important it is not to deviate from the plan regardless of which workout split you decide to use.