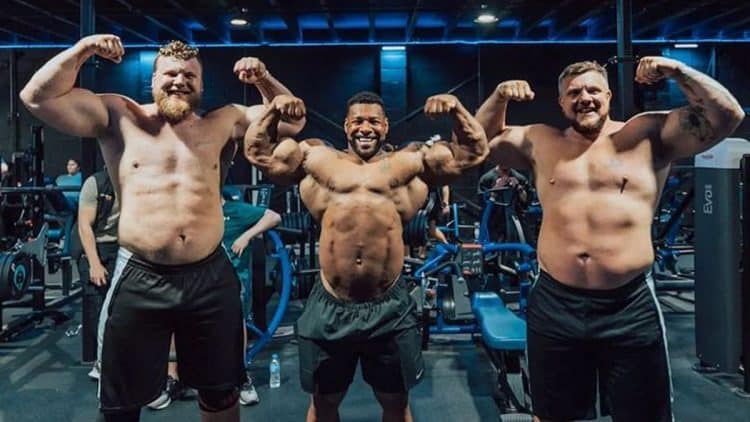 Bodybuilder Nathan De Asha welcomed top strongmen Tom and Luke Stoltman over to his gym. In a recent video, De Asha and the Stoltman brothers demonstrated a bodybuilding versus strongman workout.

Nathan De Asha quickly made a name for himself in bodybuilding in 2019. He began the season placing second at the 2019 Vancouver Pro and followed up that showing with another runner-up finish at the Yamamoto Cup a few months later. De Asha dialed in his pre-contest preparations and won first prize at the 2019 Monsterzym Pro. Despite his struggles with the law, the Men’s Open standout proved to be a special talent when he finally returned to sanctioned events.

After taking some time away from the sport, the Liverpudlian dominated in 2021. De Asha won three events in a row last year starting with the Europ Pro Championships. Then, cleaned house with first-place performances at the 2021 Arnold Classic United Kingdom and the Yamamoto Cup. As of late, De Asha was forced to withdraw from the 2022 Arnold Classic due to a bicep injury. De Asha is qualified for 2022 Mr. Olympia and is pushing the pace with one of the most decorated duos in strongman history.

Scottish professional Luke Stoltman is a five-time Scotland’s Strongest Man and the 2021 titleholder of Europe’s Strongest Man. His younger brother Tom Stoltman has also reached the top of the sport on a number of occasions. Tom Stoltman is the reigning World’s Strongest Man champion, a title he defended on May 29, 2022. While the duties relating to strongman and bodybuilding differ, fans are always excited when the two worlds collide.

You can find a full list of the exercises used in this video below:

The Stoltman brothers join De Asha at his gym looking to get in a good pump and a few laughs.

“First we are going to do some chest press, we’re going to get out pump on for the Expo so we can walk around with our T-shirts off, stay tuned, bodybuilding versus strongman.” Luke Stoltman shared.

De Asha starts the Stoltman brothers off with lying machine chest presses. While Tom is accustomed to performing this workout with dumbbells, Nathan’s gym has a machine for this movement.

“So, we are finished with incline bench press. These machines are unbelievable. Now we’re going on to the triceps extension. Usually you see people with dumbbells doing it but Nathan has got a machine there. Now that we’re pumped, let’s do it.” Tom Stoltman said.

After his brother is done using the triceps extension machine, Tom hops on, and says he has the ‘strongest triceps in the world’.

“We’re not really strongman. Luke laughed after Nathan De Asha got in some hard reps.

“Just finished up with triceps and a little drop set for big Nathan. I think he’s showing us up here. He’s looking very swole and we’re just looking very sweaty. Luke continued. I’m red-faced, our blood pressure is way too high. So, we’re going to do biceps to finish off. See how that goes, work the peak.”

De Asha and the Stoltman brothers move over to machine-seated biceps curl next.

After getting a bicep pump, Luke mentioned that Nathan wants to take part in a leg press challenge.

“Nathan is now asking us to do a leg press challenge.”

Worried about his knees, Luke says this could be the last time anyone sees him lifting weights given how dangerous leg press machines can be.

“Obviously, I hope my knees don’t pop. If they do, that’s going to be the last time you will ever see me lifting weights.” Luke Stoltman said.

The workout even got the reigning World’s Strongest Man ‘shaking like a leaf’.

“That is the heaviest leg press in the world. Holy… I was shaking like a leaf man. Jeez.” Tom said.

Before wrapping up their training session, Luke, Tom, and Nathan practice posing. They all flex for a front double bicep.

“Guys, so that is strongman versus bodybuilding done. What an amazing gym. That was good fun.” Tom told Nathan.

With 2022 Olympia on the horizon, surely working out alongside decorated strongman champions like Luke and Tom will only bolster Nathan’s confidence. After pushing the pace with the Stoltman brothers, Nathan De Asha plans to bring his best package to the stage when he returns to action.