Discover the training and diet regimen Jessica Alba follows to maintain her athletic and toned body. 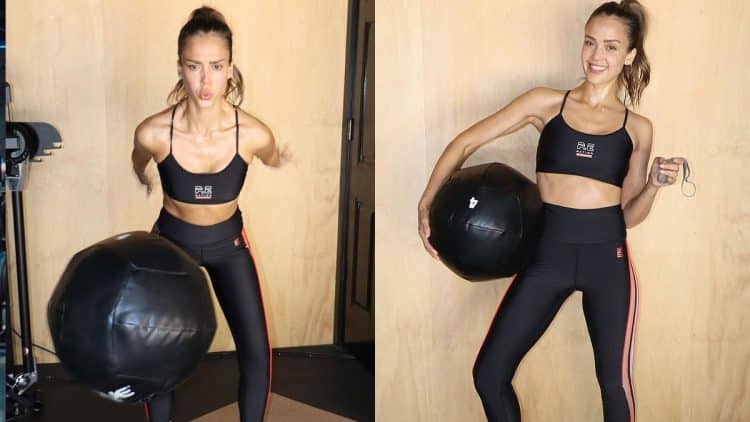 Jessica Alba is a popular actress and businesswoman, and her lean, athletic, sexy body is the envy of millions. That sort of physique doesn’t just happen. It takes serious training and disciplined eating.

Jessica Marie Alba was born on April 28th, 1981 in Pomona, California. Her father was in the air force, meaning the family moved frequently. They lived in Biloxi, Mississippi, and Del Rio, Texas, before returning to California, where they settled in Claremont.

Jessica has described her family as being very conservative, with traditional Catholic values. She, however, self-describes as a liberal, saying that she became a feminist at the age of five. During her childhood, Alba was often sickly, suffering from frequent bouts of pneumonia. She also had partially collapsed lungs on two occasions, along with a ruptured appendix and a tonsillar cyst. Jessica also suffers from asthma. Her illnesses kept her in hospital a lot, leading to isolation and loneliness.

Jessica graduated from Claremont High School at the age of 16. She then attended the Atlantic Theater Company to pursue a career in acting. This is something she had wanted to do from the age of five. In 1992, when she was 11, she won an acting competition in Beverly Hills, with the prize being free acting classes, leading to her signing with an agent. Her first role was a bit part in the 1994 movie Camp Nowhere.

In 1998, Jessica appeared in the crime drama Brooklyn South and Beverly Hills 90210. The following year she appeared in the romantic comedy Never Been Kissed. She got her big break when she was chosen from more than a thousand candidates by director James Cameron to play the lead in the TV series Dark Angel.

In 2012, Jessica launched The Honest Company, which sells a collection of household goods, diapers, and body care products. In 2015, she started a line of skincare and beauty products. Jessica is also heavily involved in charity work and activist causes, including the plight of great white sharks and gay rights.

Due to her frequent illnesses, Jessica has always been health conscious. She has followed a pretty healthy diet all her life. However, she still sometimes faces the challenges of eating healthy on the run and meeting the challenge of yummy high-carb temptations.

For the last few years, Jessica has been working with health coach Kelly LeVeque to fine-tune her nutrition.

Jessica loves smoothies and begins almost every day with a smoothie. Before working with Leveque, she would often skip breakfast. Later in the morning, she usually grabbed something unhealthy to satisfy her hunger pangs. Her coach encouraged her to get into the habit of starting the day with a smoothie.

Jessica is a spokeswoman for Zico coconut water and loves to add it to her smoothies. Here’s one of her favorite breakfast smoothies:

Cutting Back on Carbs

LeVeque has helped Jessica cut back on her carb consumption. The actress was in a habit of combining a vegan rice bowl with her favorite snack — salted popcorn. However, this was negatively affecting her blood sugar balance. She now restricts herself to just one carb meal per day.

Salted popcorn remains Jessica’s weakness. Her office used to contain a movie theater-style popcorn machine, and she’d snack on the treat all day long. However, her health coach has helped her cut way back.

LeVeque has helped Jessica replace her popcorn snacks with avocado in the form of guacamole, which provides plenty of healthy fats, helping control blood sugar levels and keeping you satiated.

Jessica’s lunch and dinner meals are low on starchy carbs. Instead, the focus is on lean protein, fat, fiber, and greens.

On holiday, Jessica allows herself to eat more carbs than usual and indulges in Italian foods like pasta and ravioli. Here is what a typical day of eating looks like for Jess:

Related: 12 Foods That Contain the Highest Amount Of Protein

Here are the training principles Alba abides by:

Related: Upper Body Warm-Up You Should Be Doing Before Every Workout

Jessica is a big fan of the 3-2-1 workout program, popularized by celebrity trainer Ramona Braganza. Romana has been Jessica’s trainer for several years.

The workout program was created by Romana while working on Into the Blue with Jessica, as the star did not have a lot of time to train. There was also not a lot of equipment available. As a result, Romana made the workouts very versatile, and they can be done with weights or with nothing but your body weight.

The workout is also adaptable time-wise. You can take an hour or compress it into 30 minutes. Each time you will still follow the 3:2:1 format of cardio, strength, and core training. Here is how it works:

Here is a sample of the 3-2-1 workout that Jessica currently performs in the gym:

Jessica performs her 3-2-1 workouts three times per week on alternate days. On her non-workout days, she does some form of an active recovery routine. Depending on her schedule, it could be anything from 10 minutes of lighting cycling to going for an hour-long hike in the woods.

Alba is not big on supplements. She prefers to get her nutrition through whole foods. However, she does take a daily multivitamin.

Jessica also adds whey protein powder to her daily smoothies while ensuring the powder is an isolate with very low carb and sugar content.

Alba is also a coffee lover. She will have a strong cup of coffee the hour before her workouts, providing around 150 mg of caffeine to deliver an energy boost to her training.

Jessica Alba brings an athletic, toned body to the screen in every one of her TV and movie roles. In this article, we’ve discovered that she follows a realistic, adaptable, and versatile routine and nutrition program to maintain her physique and health.

Give Jessica’s 3-2-1 workout a try and see if it works for your lifestyle and goals. Leave a comment below to let us know how it goes.