Martyn Ford's boxing match with Iranian Hulk AKA Sajad Gharibi has been pushed back four weeks. 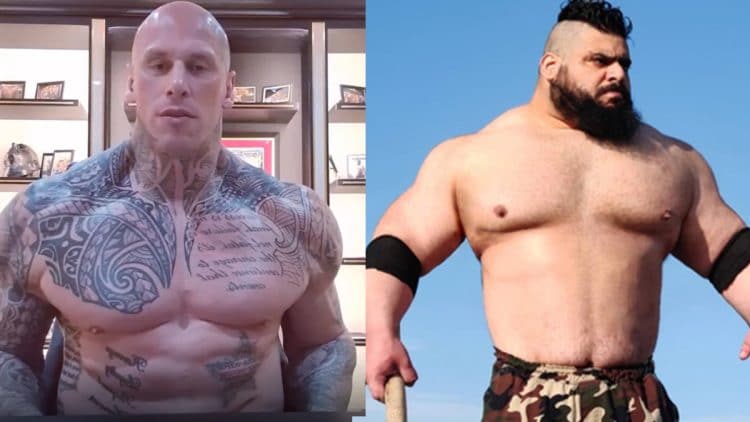 The highly anticipated boxing match between Martyn Ford and Iranian Hulk AKA Sajad Gharibi has been pushed back to April 30. Martyn Ford confirmed the postponement news in a recent Instagram post on Thursday.

The pair of massive heavyweights will collide inside the famous O2 Arena in London, England. In the lead-up to the epic event, the Iranian Hulk has continued to promote the fight with atypical training videos shared on his Instagram page. Gharibi has been seen punching concrete walls and fighting off a group of men with grabs, trips, and throws, which has fans perplexed, yet excited for the looming showdown.

Last month, the pair of fighters faced off in Dubai for the first time and fireworks ensued. During the heated altercation, Ford shoved Gharibi to the floor before Gharibi initiated a takedown albeit an unsuccessful one. With an expected crowd of 20,000 people in a rowdy arena, the hype behind the bout is building despite the date being pushed back four weeks.

Martyn Ford on Iranian Hulk Fight: “He Knows Exactly What He’s Getting Into”

Considered the scariest man in the world, the six-foot-eight Martyn Ford took to Instagram to shed some light on the fight being pushed back from April 2 to April 30.

“I can only apologise for any issues, please feel free to contact Boxstar if there is anything that’s causing issues and they assure me they will do all they can to help make this a smooth transition. On the bright side we have some huge announcements to make, and this extra few weeks gives extra time to make this a night to remember. The roof blowing off the o2 was not ideal, and a few behind the scenes issues to boot HOWEVER.. we move on, adapt and deliver .. see you there !!!! Head over to @boxstaruk now for tickets” Ford shared.

Interestingly, one tidbit Martyn shared in his post was the fact that Iranian Hulk was given the chance to pull out of the contest altogether, but opted to remain on the card and fight Ford.

“There has been a date change, 30th of April. Same venue, same opponent, same result. Just give me more time to prepare to become faster, stronger, sharper, more powerful. Believe me, a lot has happened. A lot has been said. It hasn’t changed one thing and that’s the fact. I’m a natural competitor and I want to win, and I want to prove a point to many people. Now, he has been given the option to back out, he does not want to back out. He’s 100 percent adamant that he wants this fight. So, trust me, there will be no going easy, there will be no soft fight. He knows exactly what he’s getting into now. April the 30th will be a night to remember, see you there.” Martyn Ford said.

A statement was provided by the organizers of the event, Box Star UK which read, “Due to injuries, the sporting stars and celebrities on the card are now taking more time to prepare so that the ring will be occupied by fighting fit competitors in the best shape they can be.”

Martyn Ford has been working hard on improving his striking for the boxing showdown. In preparation for the contest, Ford trained with World Champion kickboxer Rico Verhoeven last month. Ford admits the training was intense but educational. With fight night coming in mere weeks, Martyn Ford revealed that he is pushing the scale at 315lbs in training.

In addition to training with kickboxers, Ford has a background in MMA training. Years ago, Ford and Sajad Gharibi were linked to an MMA debut fight with the Poland MMA giant, KSW. In 2018, Ford inked a contract with the promotion, though a fight with the Iranian Hulk never materialized despite there being interest expressed on both sides.

It appears a few competitors on the main card are suffering from undisclosed injuries but thankfully the headliner is still happening in four weeks. Martyn Ford confirmed the fight has been pushed back but made it clear that he will put on an even better show on April 30.