"The Albatros" makes easy work with an Atlas Stone 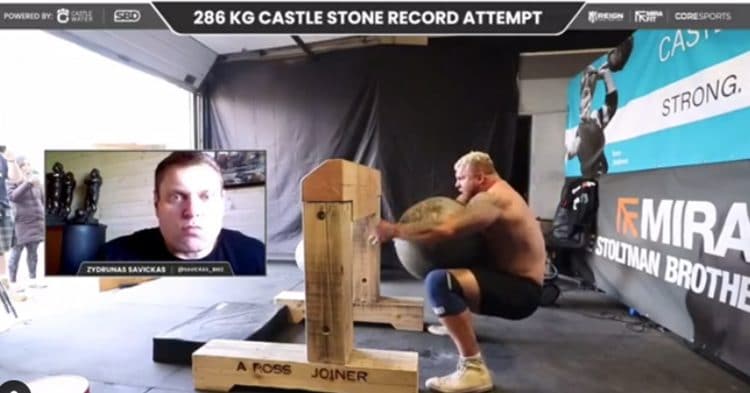 Another Saturday, another gigantic Scott-ish attempting a world record Strongman lift. Last week, the elderly of the Stolmtan brothers- Luke, tried his best at beating the 5 years old log lift record. The weight is there in him, just not on that day and at that moment. Big Z’s record stands to be tested once more.

Moving along to this Saturday, we got the younger Stoltman brother, Tom “The Albatros” Stoltman, attempting to break his own Atlast stone world record. Before Tom broke the record this past March at the Arnold Classic, it belonged to the Strongman veteran Brian Shaw. However, as of today, Tom Stoltman has broken Brian Shaw’s record once more and lifted the bar even higher when it comes to Atlas Stones.
The event was judged via skype once more by quite possibly the greatest man in Strongman history, Zydrunas Savickas, Big Z. As expected and as logic would dictate it, Tom did a few warm-up sets with lighter weight to get a feel of the stones. The first stone was 150kg and that went up insanely fast. No human should have the right to move 150kg that fast and with that ease. After that he went for 180kg which also moved so fast I can’t even begin to rationalize and explain. After a brief pause and mental readiness, Tom goes for the 250kg stone. This is a good time to remind you that 250kg is 5 kg short of Brian Shaw’s world record and here is Tom warming up with that weight. It’s insane how the Strongman sport has moved past a lot of records which seemed unbeatable up until recently.
After making a world record seem like a medium-heavy warm-up, it was time for the world record, 286kg. It’s also worth mentioning, Tom didn’t use a belt, Atlas stone sleeves, or a t-shirt for grip. He used tacky for grip and stickiness and knee sleeves for an extra bounce out of the hole when lifting the stone upwards. The record went up fairly easy and Tom looked like he could have gone for the 300kg stone right then and there and raise the world record for another 20 kg. However, as the saying goes “always leave them wanting for more” and so he did and left everyone watching in awe and wanting to see him throw 300kg.