Jesus Olivares is well on is way to more records with his latest PR lift, that saw him scoring a massive squat in training 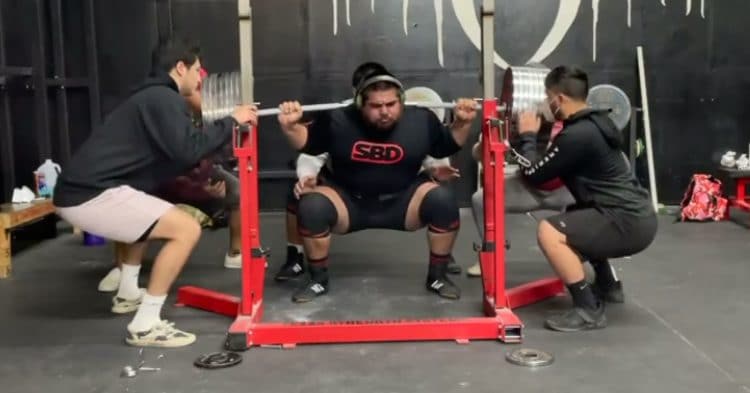 Twenty-two-year-old Jesus Olivares may have taken some time from powerlifting during his teenage years, but you can’t tell by watching him. His Instagram bio is now updated with his latest PR of 425kg/937lb, which just got posted yesterday.

Take a look at the massive squat in the video below, that he shared to his Instagram.

In his post, Olivares talked about winning and losing when he brought the stats of his session to social media. He said,

“There are moments where I doubt and waiver due to the magnitude and the risks being processed of reaching these levels but the reality is I hate to lose more than I like to win. A win is savory in the moment while a loss torments you in your sleep. There is not a second nor moment to waste, every thought builds on top of the other as do days and blocks. For honor and glory.”

Olivares means it when he says it’s a new PR. If his numbers keep climbing, he’s going to have quite the lifetime achievement list.

The USAPL has his raw personal best squat listed at 410kg. That was at the Collegiate Cup and Texas Open in December 2020.

Prior to that his best squat was 385kg in June 2020 at the Capital City Classic.

His latest is a good 40kg above his personal bests of last year. 2021 is already looking like it’s going to be a good one for Olivares.

Getting A Second Wind

It may be a second wind for Olivares, who took some time from powerlifting to enjoy his teenage years. He didn’t have too much making up to do by the looks of it, and he didn’t have stats to complain about before that, either.

We’ve previously reported that he took some time between 2015 and 2019. His first meet that he undertook when he came back he competed as a 120kg junior lifter and crushed it. At the Winter Iron Open in December 2019 his best squat was 340kg.

We thought his last squat was a good one. We can’t wait to see the next one. If we get wind of his next comp, we will let you know.

The Chin-Ups For Biceps Size and Strength Guide