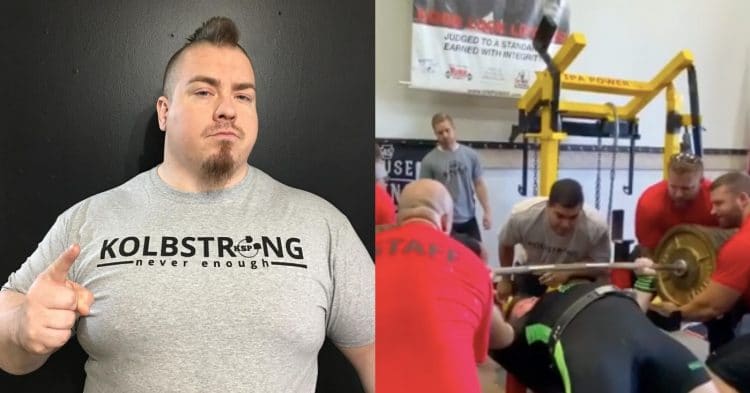 When it comes to equipped powerlifting, few posses the skills on the bench that Jimmy Kolb does. He proved this in a big way recently, by scoring a new single-ply world record.

Over the last several months, Kolb has really been thriving in competition. He has repeatedly set and reset the equipped bench press world record, consistently proving his skill on the bench.

Recently Kolb was back at it again, hitting another all-time world record in the bench press, at the IPA Strength Spectacular meet, held over the weekend in York, Pennsylvania. As seen in this post to his Instagram, the 31 year old hit a gigantic 1120lb (508kg) bench press, wearing a single-ply suit.

“Thank you @andersonpowerlifting and @unleashdstrength for all you do for me and our communities. This ones for you guys.”

Jimmy Kolb Is No Stranger To World Records

While Jimmy Kolb may have walked away from this contest with a world record, he did it by breaking the record that he already had. Earlier this year, he pressed 1080lb, which extended his other previous record of 1050lb, from a few months earlier.

So with this latest performance, he again pushed his record by an astonishing 40lb. This marks an overall growth of 70lb, made within just five months, which is an otherworldly level of growth and improvement.

Obviously this is not the same as people like Julius Maddox or Danial Zamani, both of whom are vying for the raw bench press record, Kolb has equally impressive strength. He is the only man in history to take this kind of weight for a ride, beating Will Barroti who had the heaviest bench ever caught on film with his 1105lb press, but he did it in multi-ply.

Without a doubt, Jimmy is a force to be reckoned with when it comes to equipped bench pressing. He continues to show that with each outing, he is only getting better and better, even when it seems like he has reached the limits of what humans are capable of.

With this being the third time that Jimmy Kolb has competed so far this year, it is unclear what the plans are for him, for the rest of 2021. However if he does choose to continue competing more this year, fans can surely expect to see more great things from this absolute tank of a man.

Alternatives to the Must-Do Exercises