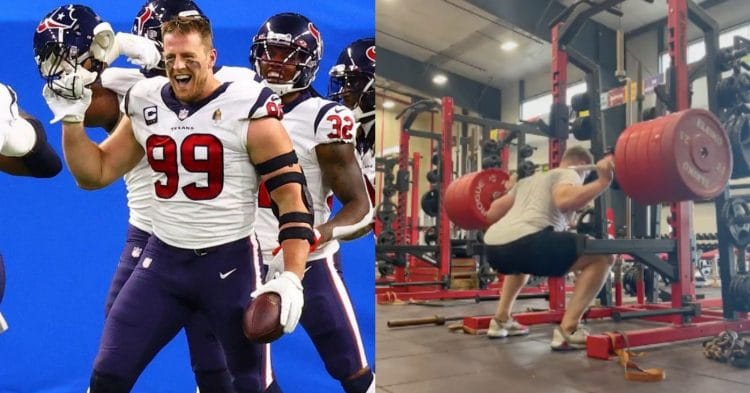 If you spend too much time on the fitness side of social media, chances are you will come across a video of someone using fake weights. Arizona Cardinals defensive end JJ Watt has seen enough of these videos, and decided to send his own type of message.

Watt initially had a successful collegiate career, before being drafted to the Houston Texans in 2011 as a first round pick. From there, he had five appearances at the Pro Bowl, before moving to the Cardinals earlier this year.

As a man with a ton of power and size, JJ is capable of moving some heavy weight, as he has shown time and again. However that was not the point of a recent post to his Instagram, where the 32-year old was seen apparently doing some intense squats, before exposing that the weights he was using were fake, in an attempt to call out the influencers of the world who deceive their followers.

In the video, Watt is seen squatting with five plates on each side of the barbell which, if they were real, would mean he was blowing through a roughly 500lb squat  However those plates were actually only 5.5lb, as evidenced by the writing on the side of the plates.

When he tosses the plate around and drops it on the floor, next to a real 45lb plate, the difference between the plates is stark. The point he is trying to drive home however, is that these types of fake weights are easily mistaken when you are quickly scrolling past a post on Instagram.

It is not exactly clear who JJ Watt is trying to call out with this video, if anyone in particular. That said, this post is clearly all about recognizing that not everything you see on social media is real, even with someone like Sylvester Stallone, so it is important to not take things too seriously.

This is a very important lesson for people to learn, especially those that are only starting out on their fitness journeys. It is easy to get dissuaded and feel weak when you see someone squatting crazy weight, but not everything that is seen in a video is real.

With that in mind, JJ Watt is a real life, actually skilled, elite athlete who could probably squat 500lb with little issue. Nevertheless, he decided to teach a valuable lesson, and he did so with a bit of flair.