The men's 212 division will be stacked this year, but how do we see the world's best competitors placing? Here's a preview and top 10 predictions. 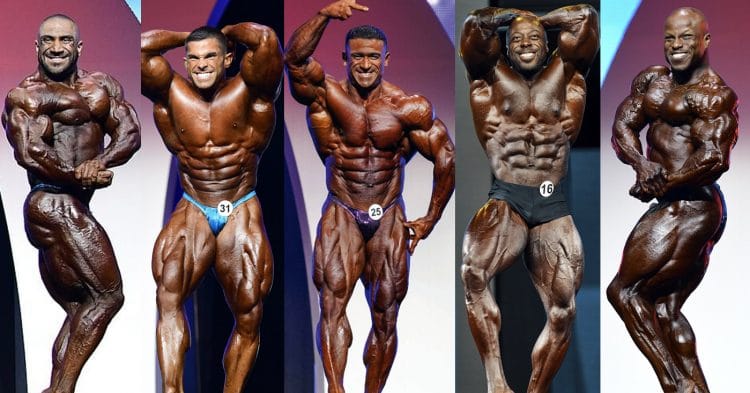 It’s hard to contain our excitement with the 2020 Olympia around the corner after such a trying year. With all of the uncertainty due to the Covid-19 pandemic this year, we weren’t sure if there’d be any more events this year.

However, many resumed and athletes were able to qualify for the biggest event on earth taking place on December 17-20 at the Orange County Convention Center in Orlando, Fl.

With just a few weeks’ notice, the event had to be moved from the Las Vegas strip to the sunshine state but new owner Jake Wood and the Olympia thankfully made it happen.

There will be hundreds of athletes competing from around the world in various divisions but let’s talk about the 212 guys and who to look out for this year.

The current 212 Olympia champion is Kamal Elgargni who stepped in as the king of the division the year after 7x 212 champion Flex Lewis decided to switch to Men’s Open bodybuilding.

And interestingly, the Libyan bodybuilder has been working with the Welsh Dragon for this year’s show. But there are several other competitors to look out for as well including last year’s runner-up, Derek Lunsford, George “Da Bull” Peterson who’s making his debut, and many more. Check out the final list of competitors qualified for 2020 Mr. Olympia here.

Here are our predictions for the top 10!

Many don’t know this but David Henry was the king of the 202 division in 2008 (before it became the 212 division). He also placed very well during his peak and took top 5 in several Olympia thereafter but it’s clear he isn’t the same anymore after moving 5 spots down from 2018 to 11th place at the 2019 212 Olympia.

Although we’d still put him in tenth looking at the competition.

A post shared by David Henry aka The OGK (@davidhenry_ifbbpro)

Guy Cisternino Jr. starting competing in the 2020 division in 2010 for a year until the weight limit was changed to 212. In 2011, he was involved in a near-fatal car crash but despite being banged up pretty good, he still managed to consistently place in the top 10 at the 212 Olympia and his best result was 6th in 2015.

Not to mention, even more recently, he had shoulder surgeries, a blood clot due to the coronavirus… that’s a warrior right there!

He hasn’t competed at the Olympia since 2016 where he finished 8th but he definitely has what it takes to be in the top ten, especially with his determination.

Cisternino has some of the most impressive quads but his back development and separation have been something that needs to be brought up. He’s shown that he can come in conditioned but that’ll be another factor in where he places and if he places in the top 10.

The “Asian Sensation” will be competing in his 10th Olympia and at 47 years old, he’s competed for over 20 years. He started off in the Open division managing to place in the top ten on a few different occasions.

But now he’s primarily a 212 competitor since 2014 although he has competed in the Open in 2018. But the 212 is arguably the better division for him.

An advantage that he has is muscle maturity and he’s known for having great conditioning. He was 8th at the 2019 212 Olympia and working with legendary Milos Sarcev, he’s looking incredible right now.

Yamagishi dominated the 2019 Dallas Europa 212 Showdown and many thought that was his best shape ever!

Not many guys get better with age but he’s a top 10 guy in our opinion if he looks like he did at that Dallas Europa.

The Spaniard Angel Calderon Frias has been looking incredible lately and has won his last four shows, the last of which was the Romania MuscleFest pro.

That definitely says something about his mindset and there’s no reason why he can’t improve upon his tenth place finish at the Olympia in 2019 (he looked insane there too).

His arms and quads and the separation and detail when he’s on is very impressive. His back wasn’t as thick as it could be last year and that will likely be the difference in how he places in 2020.

John Jewett has been very consistent winning the 2019 Tampa Pro and coming in 4th at 212 Olympia behind Shaun Clarida the same year.

But his legs and biceps are simply insane. Let’s see what he brings this year.

Ahmad Ashkanani came out of the gates strong in 2016 and 2017 taking second place both times behind none other than Flex Lewis. However, the last two shows, he’s placed 4th and 5th respectively which is concerning but he can still manage the top five.

He’s looking big and vascular in recent photos but he’ll need to dial in and bring the detail/conditioning to place in the top five this time around. Otherwise, we’ll see other guys take his spot.

It’s still too early to tell though but a perfect Ashkanani be 4th too.

Shaun Clarida deserved the runner-up spot ahead of Derek Lunsford last year according to many. He brought an unexpected package and at a height of 5’2,” he hung with the taller guys very well (hence why he arguably should have been second last year).

His conditioning and lack of fullness and separation weren’t the best in the past and his narrowness and height made it hard to compete with other guys but it seems he’s improved lots and peaked recently.

Clarida is one of those guys that has consistently improved his spot at the Olympia every year since 2015 where he took 16th.

Let’s hope he’s consistent this year and if so, he’s definitely a top 5 guy but it’s not going to be easy.

Derek Lunsford has been a very promising 212 prospect since 2017. He’s a mass monster that has a phenomenal physique but hasn’t quite been able to crack the code, although taking second place at the prestigious Olympia in 2018 and 2019 isn’t the worst thing that could happen.

Lunsford was runner-up to Flex Lewis in 2018 and had the same fate a year later when placed second to the man he placed ahead of the year prior in Kamal Elgargni.

In 2019, his conditioning at Olympia pre-judging was disappointing, to say the least, although he made improvements later on but it wasn’t enough to overtake the much better-conditioned Elgargni.

A popular criticism of Lunsford’s physique is that his legs haven’t quite matched his upper body in size but he’s always looking to improve this area. The conditioning though will have to be perfect this year with all the elite competitors that will be on stage so let’s see how he comes in.

They don’t him the “Da Bull” for nothing. Former Classic Physique competitor George Peterson is one of those guys you call a “genetic freak,” and late last year he decided to make the switch to the 212 division.

He placed third at the Olympia in the Classic Physique division for three consecutive years (2017, 2018, and 2019), but did manage to win the 2019 Arnold Classic and dominated the 2020 Tampa Pro in the 212 division to earn a spot at the Olympia this year.

We’ll see a much bigger version of him in the 212 as he has to maintain a weight of 195 lbs at 5’7″ and this should be the better move for him. With his improvements and how he looked at the Tampa Pro, it’s not hard to conclude a top 3 placing at the 2020 Olympia.

A common criticism is his forearms and calves which are genetic weaknesses but he does have the package to do extremely well at the upcoming Olympia.

Kamal Elgargni was on point and miles ahead of the competition at the 2019 Olympia, especially with his conditioning – and that’s why he was able to beat the bigger Derek Lunsford last year.

Plus he had great posing!

He planned to retire after his victory at age 48 but obviously had a change of heart and is looking place at the top once again. In 2018, Elgargni took third right behind Derek Lunsford and then champion Flex Lewis.

So having his hand raised at the 2019 contest must’ve been an amazing feeling.

But he recently came down to the Dragon’s Lair in Boca Raton, Florida to train with the man who was king of the 212 division for seven years in James “Flex” lewis. Not to mention, it’s no secret he and coach of the stars Chris Aceto work together.

This is a lethal combination of champion-caliber preparation, and we think Elgargni has a very good shot at successfully defending the title in 2020.

He’s a very complete bodybuilder and if he brings the same or a slightly better package than last year; it’ll be very hard to dethrone him.

The 2020 Olympia is going to be epic for all divisions but the 212 lineup is going to be interesting with Kamal Elgargni, George Peterson, Derek Lunsford, Shaun Clarida, and the other very impressive physiques that you’ll see on stage.

Of course, the order of our predictions for this year is only our opinion. Feel free to share your top 10 and be sure to stay in the loop for more updates on the Olympia weekend!

Despite hanging up his posing trunks, four-time Mr. Olympia Jay Cutler remains committed to the sport and its evolution. In...