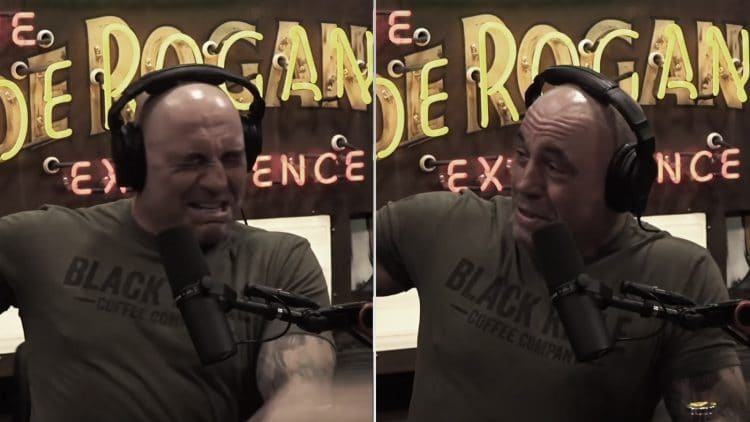 When it comes to trying out new things, very few human beings come close to popular podcaster and UFC color commentator Joe Rogan. In a recent episode of The Joe Rogan Experience (JRE) podcast, Rogan and his guest Theo Von tried to sniff the smelling salts that many competitive athletes use as a powerful stimulant to wake up and perform better!

Theo Von is a stand-up comedian and the host of This Past Weekend podcast and the co-host of The King and the Sting podcast. Strongman Rob Kearney visited JRE recently and had a conversation with Joe Rogan about smelling salts. Rogan’s assistant Jamie bought Jujimufu’s smelling salts for trying and Joe Rogan tried it with Jamie and Theo Von during the latter’s visit to the podcast.

The three men present in the studio could feel the strong pungent smell even through the plastic bag and sealed bottle of Jujimufu’s smelling salt.

Jamie suggested taking a waft and not fully inhaling the salt. He also suggested keeping the eyes closed while at it and warned to not smell them more than twice a day.

Rogan passed on the plastic bag containing the smelling salt to Theo Von who reluctantly opened the bag and broke the seal to try out the salt. Overwhelmed by the already strong smell that filled the room, Joe Rogan said:

“I feel like we should open it. But if we open it, is it bad to open in this room?”

“We’re just freaking out about the smell and the plastic is – you hear that? That’s Theo taking the plastic off the bottle. So that b* was sealed up.”

Intent on trying the ‘gnarly’ smelling thing, Theo Von continued to open the bottle and suggested that it was not the only crazy thing he has tried in his life. Theo Von inhaled the salt and could barely keep his equilibrium but managed to keep his wits together as the conversation continued:

“They do that right before they lift!” Joe Rogan said.

Joe Rogan held the bottle as far as possible before pondering over how athletes smell these salts in order to jolt their nervous system before the performance. When it came to taking a sniff, however, Rogan jolted in his seat. Putting the cap back on the bottle, Rogan ranted his thoughts out:

“Oh my god! Holy sh*! Oh my god! Oh my god! That’s stunning! I would have never imagined. That’s so unnecessary.”

As if trying to take Jamie down with him and Von, Joe Rogan left the seat and made sure that his assistant could ‘enjoy’ the same experience. Loud coughs were heard which only means the mission was accomplished.

What are smelling salts?

Smelling salts are often used to restore the consciousness of knocked-out boxers. However, a majority of boxing competitions have banned their use. Powerlifters and strongmen typically use smelling salts as a nervous system stimulator to perform better during competition.

Courtesy of PowerfulJRE YouTube channel, you can watch the full video here: