Joe Sullivan is lifting extremely heavy ten weeks out from his next competition. 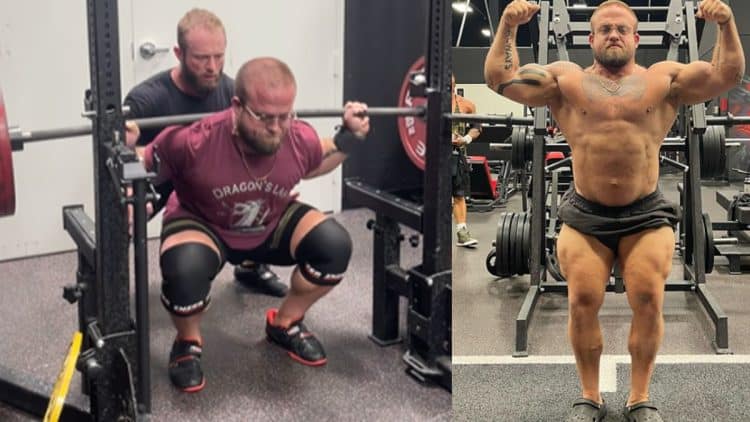 A name that cannot be overlooked when discussing the greatest squatters of today is Joe Sullivan. He is an All-Time World Record holder in the 100-kilogram weight class, and is renowned for performing impressive squat lifts. Nevertheless, Joe is constantly looking for ways to enhance his performance, just as every powerlifter does. So, on July 18, 2022, he shared one of his new achievements, which saw him squat 342.5 kilograms (755 pounds) for a three rep PR.

Joe Sullivan performed three reps with incredible technique and controlled breathing in between. With regard to the equipment, he used a lifting belt, knee sleeves, and wrist wraps. So, his new three rep PR is raw by powerlifting rules.

“Happy with today, and the way things are trending. I botched the walkout sequence as I missed my rebrace due to just being a bit excited, but it didn’t seem to matter much in terms of strength.”

Sullivan’s progress seems to be going well, since he’s moving some serious weight with 10 weeks left until his next competition. That will be the 2022 USPA Pro Raw Championships, which will take place from September 24-25, in Kansas City, Missouri. Furthermore, Joe will take part in another undisclosed competition just three or four weeks after that.

Although Joe Sullivan has yet to compete this year, he has competed 23 times during his career. Joe started competing in 2008, when he was just 14-years-old. It is worth noting that he has been extremely successful since he started his career, which in turn makes his resume look impeccable. Joe won 15 sanctioned competitions, and is currently undefeated in his last six appearances.

The greatest moment of Joe Sullivan’s powerlifting career was when he set the new U100KG All-Time World Record Squat by lifting 380 kilograms (837.7 pounds) at the 2021 WRPF The Bucked Up Showdown.

Joe Sullivan recently attempted to break another squat record. However, this one was not connected to powerlifting. Joe wanted to break Tom Platz’s historic 23-rep 525-pound (238.2-kilogram) squat record. Unfortunately, Joe did not manage to complete the set, but got quite close with 20 repetitions.

It will be interesting to see how Joe Sullivan’s Preparation for the 2022 USPA Pro Raw Championships will unfold. It appears, however, that he is on the verge of breaking his own World Record. Joe does not have many athletes ready to rival him, but he knows that a heavier squat would only improve his legacy. So, he has all the motivation he needs.