Jonathan Cayco was not able to retain his title, but did further improve his World Record. 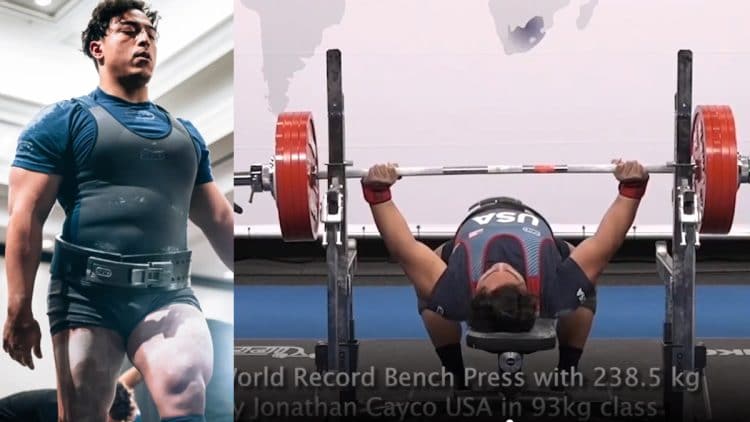 Following his recent performances, everyone expected Jonathan Cayco to dominate the 2022 IPF World Classic Powerlifting Championships. However, it did not quite go according to plan, as the American representative failed in defending his World Champion title from 2021. Despite still putting up a spectacular performance, the 93-kilogram weight class roster proved to be more difficult than anyone anticipated. Hence, Jonathan Cayco won the bronze medal after finishing third.

Jonathan Cayco didn’t underperform in the 2022 IPF Worlds and still has many positives to take away from the event. One of those is his new IPF Bench Press World Record of 238.5 kilograms (525.8 pounds). This is 0.5 kilograms (1.1 pounds) heavier than the old record which Jonathan Cayco set at the 2021 IPF World Classic Powerlifting Championships.

If Jonathan Cayco had managed to mimic his 2022 AMP Classic Open Nationals performance from just two months ago, he would have won the IPF World’s and claimed the Total world record.

“Far from what I wanted obviously, but we roll with the punches.”

“I will make sure to come back stronger than ever🙏🔥.”

Jonathan Cayco weighed in at 92.55 kilograms (204 pounds) for this competition. Cayco also has heavier competition PRs in all lifts from competitions prior to this one, but none of them counted as IPF World Record, since they were not performed in a competition sanctioned by the IPF.

*Jonathan Cayco’s squat competition PR is 305 kilograms (672.4 pounds) and he set it at the 2021 USAPL Iron Office Winter Classic.

*Jonathan Cayco’s bench press competition PR is 242.5 kilograms (534.6 pounds) and he set it at the 2021 USAPL Iron Office Winter Classic.

*Jonathan Cayco’s deadlift competition PR is 347.5 kilograms (766.1 pounds) and he set it at the 2022 AMP Classic Open Nationals Presented by SBD.

You can watch Jonathan Cayco breaking the World Record here:

Related: Jonathan Cayco Does A Dance, Then Wrecks A 735lb Deadlift

This was Jonathan Cayco’s 14th professional powerlifting competition since he started competing in 2015. He did not manage to grab his 10th victory at the 2022 IPF World Classic Powerlifting Championships, but he will continue preparing in the hopes of coming back and winning the competition next year.