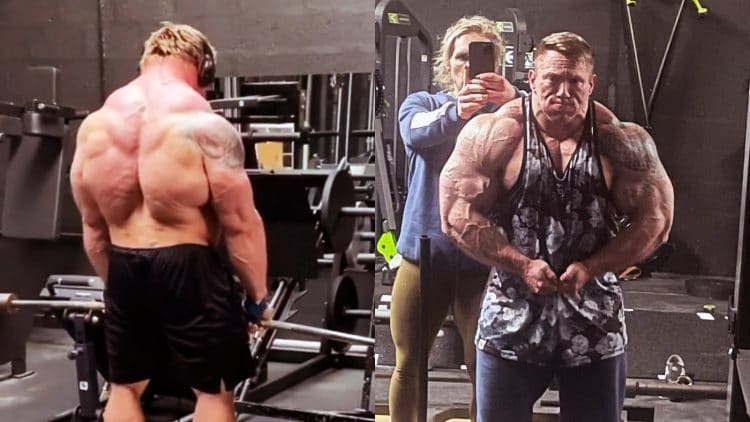 Mass Monster Jordan Peters recently tore his adductor muscle during a leg day workout. The Brit has resumed steroid use five months after announcing the decision to quit. He hopes to bounce back quickly with the help of steroids, proper nutrition, and rehab.

After making a name for himself as a trainer and IFBB bodybuilder, Jordan Peters quit bodybuilding and steroid use in the wake of Andy Haman’s passing back in July 2021. Peters was not only open about steroid use but also used his forum to educate people about the benefits and risks associated with steroid use. He decided to not take those kinds of risks to his health. Declaring his decision in a lengthy post on his forum, back in July, Jordan Peters had revealed that he would stop using steroids and opt for Testosterone Replacement Therapy instead.

Jordan Peters reveals that he is back to taking steroids

In a lengthy Instagram post shared recently, Jordan Peters revealed that he is back to using steroids. Peters reiterated that he has been on extremely low doses for a long time. He added that his body is ready to respond to the increased dosage.

“Now I’m back taking bits! I’m 8 days back on a semi proper cycle ( I added 700mg primo / week ontop of my 100-150mg test / week). I have been running low for a long time, so things change fast when your body is ready to respond.” Jordan Peters wrote in the caption to his post.

Jordan Peters has been brutally honest about everything he has done throughout his career. Continuing further in the post, the British bodybuilder expressed his frustration towards people who did not believe his honest words.

“For the chappies that didn’t like to believe I was running much less, despite blood work, and my word – which is always honest, now you can see the diff. If you thought what I was doing before was strong, wait and see for another month …. then you need to find another way to talk shit. Just like some won’t believe the post I made yday of the natural pro card win, you have no idea what can be done when you train harder than you can imagine, actually understand training and are so accurate day in day out.”

Peters decided to quit steroid use in an attempt to lead a healthy life. However, he does not want to step away from anything that is quintessential to his pursuit. Knowing the possible dire consequences of the decision, Jordan Peters hopes to be careful with steroid use.

“Now I wanted to walk away from all this, but I just can’t, I love it too much, it’s so deep in me, It’s all I think about, it’s in my blood – to get stronger, to progress, to be the hardest trainer I possibly can be. I just have to be sensible and I will be sensible with drug use now. But I have goals I can’t call it a day on,” Jordan Peters wrote.

Jordan Peters suffers an adductor injury during a training session

Peters is in the middle of a semi-proper cycle to get back in the game. However, he suffered the first major setback in the form of an adductor tear. Peters shared a clip with the post that shows him suffering the injury on the leg press machine. The Mass Monster let out a bone-chilling scream as the pain from the muscle tear settled in.

“The annoying bit again is 2 days ago I tore my adductor badly (slide 2), you can hear the tear just before I scream. It’s bruised bad and it’s sore, but I am gd at rehabbing now, so with gear + food going up, it shouldn’t set me back toooo much. If you can’t stop thinking about something, don’t ever give up on it – if that’s love, goals, faith, whatever it is…. For me, it’s simply just progress, whatever shape it comes, there has to be progress,” Jordan Peters wrote.

Jordan Peters talks about the rehab process to heal the leg

Peters revealed on his forum that he suffered lat, pec, and quad injuries over the last year. He then went on to explain what led to the adductor tear.

“(I tore the adductor of) the same leg as the quad – the adductor has been taking a pounding for weeks as I have got myself to all time strength, but the quad from the ijury obv doesn’t work as well, which means adductor compensates – until it can’t keep up and then gets hurt,” Jordan Peters wrote.

From his experience of dealing with injuries, Peters believes that it will require twelve weeks of rehab. He then elaborated further on the process and expressed his desire to get started.

“This will be a 12-weeker again at least rehab wise, that’s definitely the minimum when you hear the fibres tear. I will start flooding with blood the moment I can, will only be a few days. I will be able to leg extend fine, but obv no compound work on the bad leg. I will train the good leg totally as normal.

I will flood the leg daily to start from the moment the initial tenderness drops – I can feel the tenderness start to rise now. Tmo it will be too sore to walk properly and then after a few days that drops off. Then only certain moving will cause acute sensation,” Jordan Peters wrote.

Jordan Peters does not quite possess the kind of body composition that the ultra-elite competitive bodybuilders do. However, honesty and dedication to the craft make him a special individual. Fitness Volt wishes him a speedy recovery and a successful career ahead.