After being emotionally affected by the death of Andy Haman, mass monster bodybuilder Jordan Peters has decided to stop using steroids, quit competing, and switch to TRT. 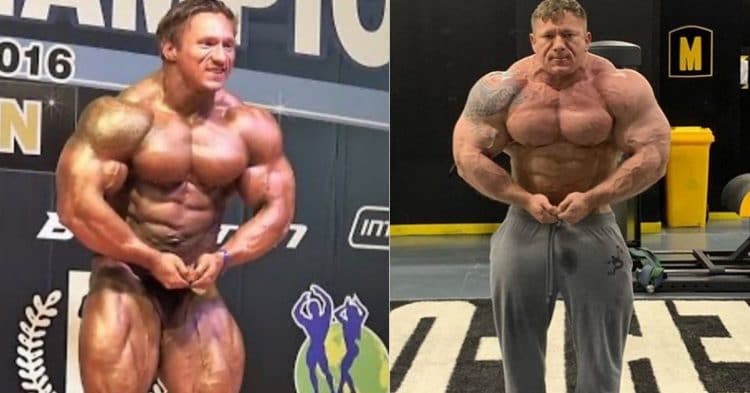 Known for being a complete mass monster and something of a spectacle within bodybuilding, Jordan Peters has been honest with his fans about his use of steroids. Now he is keeping that same honesty, in announcing that he has decided to quit using, and cementing.

Making a name for himself, both as a coach and an IFBB bodybuilder, Peters does not quite have the necessary physique to be one of the best in the world. That said, he has still attracted a solid fanbase of people for the fact that he is something of a mass monster, and physical freak of nature.

The main reason for this, as he has expressed openly, is his use of anabolic steroids. Jordan has been vocal and honest with fans about this use of gear, falling under the category of people who use their platform to be an example for others for the pros and cons of using steroids.

However it seems that Jordan Peters is going to change up his routine, and stop using steroids, and quite competing. He made this official announcement with a lengthy post to his forum.

In the post, he explains that he was deeply moved by the recent death of Andy Haman, as well as the passing of Luke Sandoe. So in an effort to not take these same risks with his health, he has decided to stop using Tren and other steroids, instead switching to a Testosterone Replacement Therapy (TRT) plan instead.

This last week or so Corinne and I have been talking lots just about the direction of things for me and I have been talking about it more and more of late in regards to wanting to shut down the drug use and see what I can do and how I can look on a trt dose. I was going to keep pushing this whole year but honestly I’m hating injecting, I’m hating being this body weight and I’m just not feeling good ! I do like how I look , but when you have been this heavy for this long I can’t tell you how much it takes a toll on you and like I have said I’m not going to be winning any prize money from competing and anything I can help share and teach people from my experiences thus far aren’t going to change from another year of pushing !” Peters said.

“Recently Andy Harman passed away and that’s just been the tipping point for me , when I first got really into this I loved how strong he was, how he looked and him passing while I have this on my mind is a real eye opener for me . I have had multiple friends die, one of my absolute closest friends died because of this shit and then obv recently Luke passed too , which although not directly related , is still all inter twinned with what we do.

So from here it’s time to shut this down and I will show you guys how you can look on very low doses , when the goal is just to look great , feel great , be able to manage your food in a way that if you want to eat meals out with loved ones you can do that and it not impact how you look or your goals of maintaining a look your proud of.

I called it the trt + log as I will no doubt when go on holiday and want to tidy up another 7-8 pounds use a little primo or mast , im not going to even kid myself that I won’t , but what I’m certain of is creating a baseline look on 250 test/ week – I will split this into twice a week shots , 4iu gh / day split 2 am and pm . No a.I , no insulin, no anything extra until we have a baseline look established which will probably take a few months as I will no doubt hold a chunk of strength from the eq / tren e for a bit and it’s only going to be after 12 weeks we can see what is what and how much starts to drop off me,” Peters added.

“I know it’s potentially a shame that I won’t get onstage again but honestly it just isn’t something I want or care enough about to keep pushing the drugs , the tren cough I had 2 days ago literally was enough to be like, ok fuck this I’m done ever taking tren again – which sounds so extreme to some but when you have taken as much tren as me you will soon relate . So this very much won’t effect the goal of getting super lean still as I enjoy that challenge and structure of diet. It won’t change at all how hard I train and I’m pretty sure I will still be able to do some strong shit even on just trt .

Food wise this is where we have been at , I won’t change this at all for now – the drugs leaving I will negate as we go with more movement so I don’t get fat in this interim period of working out exactly where my energy balance will be , what cardio I will need , how many steps I will need to maintain the look that I want to hit .” 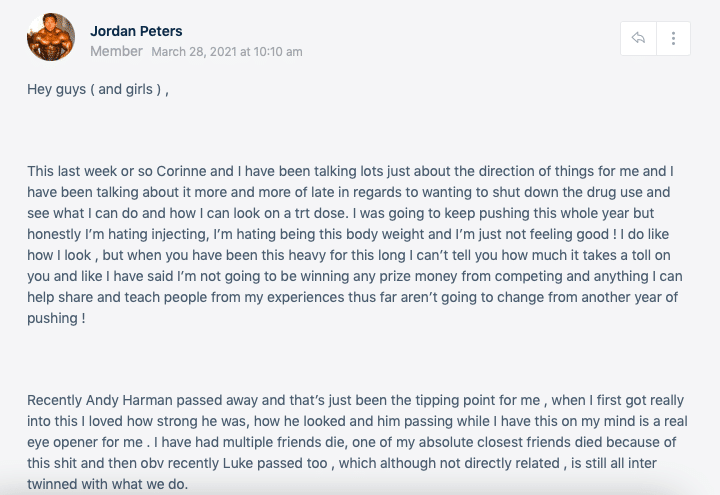 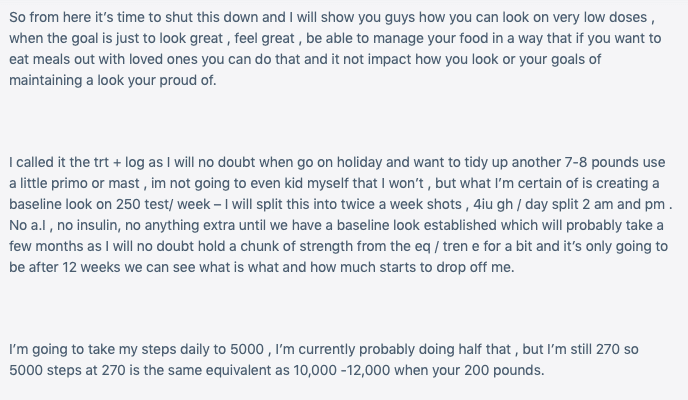 It is clear that this was not an easy decision for Jordan Peters to come to, and it was one that he thought long and hard about. It will be interesting to see the changes that come to his physique now that he is changing what he is putting in his body.